watch 02:03
Wiki Targeted (Entertainment)
Do you like this video?
Play Sound

A pale-yellow, dutch colonial barn-style, with brown-stone accents, Susan's house was burnt down at the end of 2006 by Edie after discovering Susan and Karl's affair, although the house was then rebuilt almost identically.

Wisteria Lane residents Susan and Karl Mayer moved into the home in 1992 with their daughter Julie Mayer. In 2003, Karl has an affair and he and Susan divorce with Susan and Julie keeping the house. Briefly during season one, Susan's mother Sophie Bremmer moves in with Susan when she and her boyfriend have a fight. Sophie moves out when she and her ex-boyfriend get engaged. In the season three finale, Susan marries her boyfriend of three years, Mike Delfino and he moves in. Susan and Mike have a son named MJ Delfino and he lives with them. Julie moves out in the season four finale to go to college and then during the five year time jump, Mike leaves Susan after a fight. Mike and Susan remarry in the season six premiere and Julie also drops out of college and moves back in. Julie moves out mid way through the sixth season to be with extended family up north. In the season six finale, Mike, Susan, and MJ rent out their house and move to an apartment across town due to financial difficulties.

Former Wisteria Lane resident Paul Young returns to the lane after being released from prison and rents Susan's house. Paul lives with his new wife Beth Young until his wife Beth shoots herself in the head at a hospital mid way through the season after Paul kicked her out. Paul lives in the house for rest of the season but moves out at the end so Susan, Mike, and MJ can move back in and because he is returning to prison.

Susan, Mike, and MJ Delfino return to Wisteria Lane after Paul goes back to prison. Mid way through the season, Susan's daughter from her first marriage moves back in six months pregnant. In episode sixteen of season eight, Mike is shot and killed by a loan shark and Susan is left a widow. Susan, Julie, and MJ continue living in the house until the end of the season when Susan realizes that there are to many memories of her late husband in the house so she decides to move up north to Boston so Julie can continue school and Susan can help raise her granddaughter. Susan, Julie, and MJ move out in 2017 and sell the house to a couple named Jennifer and Steve. At the end of the series, Jennifer is seen putting a secret box in the garage proving that they have a secret. 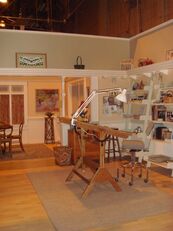 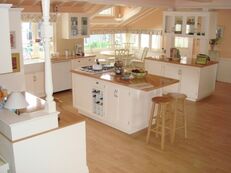 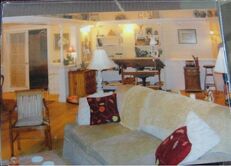 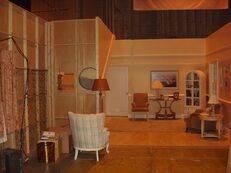 Susan interior house
Add a photo to this gallery
Retrieved from "https://desperatehousewives.fandom.com/wiki/4353_Wisteria_Lane?oldid=90140"
Community content is available under CC-BY-SA unless otherwise noted.