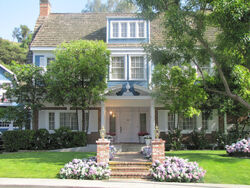 4354 Wisteria Lane is a house on Wisteria Lane, a street located in a small suburban in Fairview, Eagle State. The house was the residence of home-fairy Bree Van de Kamp and her family from 1994 to 2020.

The house is a classic dutch colonial style construction with a bricked lower-level and blue weatherboard upper.

Wisteria Lane residents Bree and Rex Van de Kamp moved into the house in the year of 1994. Along with Bree and Rex were their children Andrew and Danielle Van de Kamp. In the early season one, Rex moves out after wishing for a divorce but soon moves back in after their son put someone in a coma. The Van de Kamp's lived together for rest of the season until in the season finale, Rex dies of a heart attack leaving Bree as a widow. Bree, Andrew, and Danielle continue living in the house until towards the end of the season, Bree kicks out Andrew. In early season three, Bree remarries to Orson Hodge and her son Andrew moves back in. Mid way through season three, Danielle gets pregnant and is sent to live in a convent. Danielle returns home when she is eight months pregnant in season four and gives birth to a baby that Bree and Orson legally adopt. Danielle moves out in episode eight and Andrew moves out not to long after. Bree kicks Orson out towards the end of the season for committing a hit and run but lets him move back in if he goes to prison for three years. Orson agrees and leaves for three years. During the five year time jump, Danielle comes back to take Benjamin so now only Bree and Orson live in the house. Also during the time jump, Bree starts drinking again which leads to Katherine Mayfair moving in to get Bree to quit her addiction. In the season six finale, Orson leaves Bree and they get divorced. In mid season seven, Bree's new boyfriend Keith moves in but eventually moves out to go to Florida. In mid season eight, Bree nearly kills herself so her friend Renee Perry moves in to help her beat her addiction once again. In mid season eight, her son Andrew also has to move back in due to financial difficulties. After the series is over, Bree remarries to her boyfriend Trip Weston and he lives with her until they move to Louiseville, Kentucky in the year 2020.

Retrieved from "https://desperatehousewives.fandom.com/wiki/4354_Wisteria_Lane?oldid=88175"
Community content is available under CC-BY-SA unless otherwise noted.