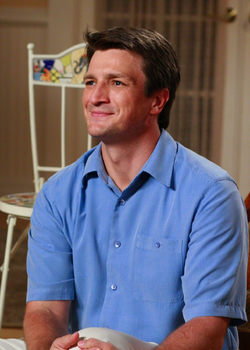 Adam Mayfair is Katherine Mayfair's ex-husband. He and Katherine left Chicago and returned to Wisteria Lane because of a patient who sued him for sexual assault.

Adam Mayfair moves in Wisteria Lane with his wife Katherine Mayfair and stepdaughter Dylan Mayfair. As he is moving boxes into the house, he meets four Wisteria Lane residents: Bree Hodge, Susan Delfino, Gabrielle Lang and Lynette Scavo, and Katherine tells the ladies that Adam is a doctor. At the end of the season premiere, Adam tells Susan in front of her and her husband Mike Delfino that she is pregnant. He and Katherine find an attic room in their house and Adam asks her "Is this the room?" Katherine tells him that it is, and that Dylan wants to move into it, however she won't allow it. When he questions her whether they made a mistake moving back to Wisteria Lane, she tells him that they didn't have a choice. In the second episode of Season Four, Adam watches an argument between Katherine and Dylan when Dylan asks questions about her father, and Adam watches unhappily when Katherine slaps her across the face. However none of them knew that Bree was around the corner listening to the entire conversation.

Later at the halloween party Bree fetches Adam and gets him to deliver Danielle's baby and Adam admits to Bree that he knew she was faking being pregnant for a long time, Adam helps Danielle give birth to the baby whom she names Benjamin and he promises not to tell anyone a thing.

It is often implied he has a history as a ladies' man and indeed it is revealed that he left Chicago because of a patient who sued him for sexual assault after he left her, although he let Katherine believe she was just an erotomaniac. When she finds out, she asks him to leave which he does and while packing his stuff he finds Lillian's note and discovers Katherine's mystery making him decide to actually walk out on her.

In episode 4.11, Dylan wants to talk to Adam because she is willing to know the truth about her father. Adam meets with Katherine before talking to Dylan, and they decide that he should learn what Dylan knows and what she doesn't, and then Adam would make up something. After this, Katherine tells him that she wants to patch things up with him, but Adam guarantees that he will give her one last alibi, but then he is done with her.

In the Season 4 finale, Adam and Katherine seemed to have re-kindled their marriage. They even go to Dylan's cello recital together, as a family. Since Adam had never seen a photo or ever met Wayne he didn't know he was also at the recital. Wayne asked Adam during the intermission to help with some car trouble he was having. Wayne then knocks Adam un-conscious with a tire iron. Wayne takes him to some abandoned shack and beats to the point where Wayne thinks he has killed him. After Wayne leaves to deal with Katherine, Adam who was never really dead, steals a mans car and heads to Wisteria Lane to save Katherine from Wayne's wrath. He shows up just as Wayne is about to shoot Katherine. The two men engage in an off-screen scuffle and Wayne shoots himself in the abdomen. Bree then takes Adam to get cleaned up. He isn't seen after that. It is assumed that he moved back to Chicago.

Retrieved from "https://desperatehousewives.fandom.com/wiki/Adam_Mayfair?oldid=88003"
Community content is available under CC-BY-SA unless otherwise noted.