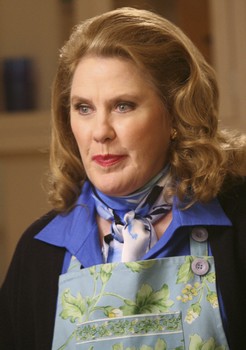 Adele "Mama" Delfino is Mike's overbearing mother, who visited Wisteria Lane on Mother's Day to meet her new daughter-in-law and to help prepare for her grandson's birth.

Adele hails from Texas. She married Nick Delfino and had two children, Mike and Laura. It emerged that Laura was autistic, with such a severe form that she couldn't even speak. Adele decided to give her away to be cared for by others, as keeping an autistic child in a domestic environment so consumed by tension (Adele was regularly beat by Nick) would prove to be too big of an inconvenience. Therefore, Adele had to live with the decision of giving her daughter away for the rest of her life, something that ate away at her. She kept this secret from Mike for a majority of his life. ("With So Little to Be Sure Of")

Adele comes for a visit on Mother's Day. She brings Susan a recipe book as a present, since she had heard from Mike that Susan is not a good cook. Adele also offers herself to teach her to cook. Adele rudely mentions their financial issues while she and Susan prepare for dinner one night, but Susan insists that they do not have any problems financially as they both have jobs, although Adele thinks Susan's job as a children's book illustrator is more of a hobby and thus does not pay much. When Adele, Mike and Susan go to a restaurant to lunch, Susan tells Mike not to complain to Adele about her, but Mike insists that his mother is trying to help. As Adele rambles on about Susan's shortcomings, deciding that she would stay to spruce up the house, Susan fakes labor by spilling her club soda on her leg. Mike rushes Susan out of the restaurant to take her to the hospital, but Susan informs him her 'embryonic fluid' is simply club soda. She expresses her frustration for Adele's harsh words. Later, Susan then goes into labor for real later at home, while Mike confesses to his mother that certain things she said hurt Susan's feelings. Adele apologizes and Susan accepts her apology and heads for the hospital to give birth. ("Mother Said")

Retrieved from "https://desperatehousewives.fandom.com/wiki/Adele_Delfino?oldid=88277"
Community content is available under CC-BY-SA unless otherwise noted.