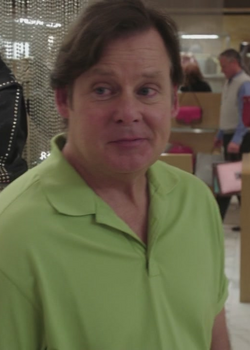 Alan is one of Gabrielle Solis' male customers over at Cumberly's, one of the many she flirts seductively with in order to get them to buy expensive items from her.

A middle-aged man, Alan, is walking around the store where Gabrielle Solis works, when she spots him. This prompts her to remove her wedding ring and approach him. Seductively, she greets him and introduces herself, asking if she can be of any help. Alan says he's just trying to find the men's department, as he needs some socks. Gaby says she can help him with that, and she then puts her hand over his leg and slides it down as she crotches down to examine his ankle. She pulls his pants up a little, to reveal the ankle, and tells him his ankles deserve so much better. Alan says, rather nervously but flattered, that he always thought they were just regular ankles, but Gaby corrects him, saying they're exquisite. She taps the ankles and asks him if he works out. Alan tells her he does a little mall walking.

Gaby gets up and tells him he's got the perfect ankles for cashmere, which isn't something she says to every man. "Let me show you a few pairs.", she says, before walking off. Alan follows her, smiling. Later, he's sitting down, holding a glass of champagne in his hand and admiring a $40 pair of socks, surprised at their price. Gaby lets on that she realizes it's costly, "but there's just something irresistible about cashmere", she says, as she hands him a cashmere sweater, telling him not to buy one of those, otherwise she won't be able to keep her hands off of him. ("With So Little to Be Sure Of")

Retrieved from "https://desperatehousewives.fandom.com/wiki/Alan_(8.19)?oldid=77296"
Community content is available under CC-BY-SA unless otherwise noted.