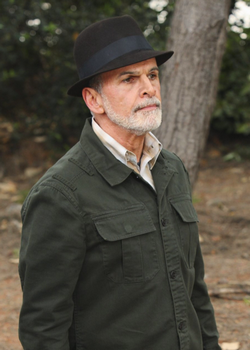 At some point, Alejandro met Lucia Marquez and married her. When his stepdaughter, Gabrielle, was 15, he once came home drunk and raped her. Nobody believed Gabrielle when she tried to report it, especially her own mother. When Gabrielle grew up, this experience gave her a need to protect children (as nobody protected her from Alejandro). ("Suspicious Minds"/"Flashback")

After his divorce with Lucia, he changed his name to Ramón Sanchez. At some point after this, he met Claudia. They married and Alejandro became the step-father of Marisa Sanchez. He also molested Marisa. ("Who Can Say What's True?")

Gaby, at the instruction of her therapist, has written a letter to her stepfather for closure and the therapist wants her to read it at his grave. This means a very reluctant return to the town where she grew up. But she gets a surprise when she arrives. The town is enamored with her since she’s the most famous person to ever have come from there. She’s so happy to be the center of attention that she never gets to her stepfather’s grave, but she gets her closure anyway. While visiting her old elementary school she confronts the nun to whom she confessed about the abuse. As a little girl, the nun accused her of lying and she still does now. Gaby tells her off, then tells Carlos she’s ready to leave. ("Farewell Letter")

After she saw a bloody slasher movie, Juanita sees a stranger standing on the lawn and now wants to sleep in Mommy and Daddy’s bed. Gaby comes up with a plan to help Juanita – camping on the front lawn. After being scared witless by a plastic ax carrying Lee, Juanita realizes that not everything is real and her nightmares are cured. But later, a strange hat wearing shadow appears on the side of the tent. Gabrielle thinks that was Lee, again. But, it was Alejandro. ("Then I Really Got Scared")

Gaby sees the weird hat guy skulking around outside and goes to Bree to ask her for a gun. Bree signs her up for a gun class instead. When the instructor confronts her, she realizes that she’s too afraid to actually shoot someone and the instructor kicks her out. At the grocery store, the creepy man is there again. When she asks to watch the camera's video, she understands the man is Alejandro. She goes back to the gun class – much more seriously this time. ("And Lots of Security...")

Alejandro is now hanging around outside in broad daylight, so Gabrielle drives off to the woods with her gun. She’s got the gun pointed at him, but when he apologizes for raping her, she can’t bring herself to shoot him. She tells him to leave and never come back. But, during the dinner, Alejandro is waiting for Gaby at her house. As he’s terrorizing Gaby, Carlos arrives home and hits him over the head with a candlestick and kills him. Moments later Susan, Bree and Lynette arrive at the house and see the dead body.

Gaby is worried that Carlos will go to jail because the stepfather was unarmed. Never mind that he was trespassing in their house and assaulting Gaby. Bree is the one who comes up with the idea of hiding the body. Alejandro's body was wrapped up in a red cloth bag and then he was stuffed into Gabrielle large, hard wooden chest, and he stayed in their until the dinner party at Gabrielle's house had ended. ("Come on Over for Dinner")

After the end of the dinner, when all the neighbors finally leave, Gaby, Bree, Lynette, Susan and Carlos take Alejandro’s body to the woods and bury him. Bree and Gaby are staying strong, but Lynette and Susan look like they’re about to crack. Bree makes them take a pact that they will all keep this secret. One month later, Bree and Gaby are off to find Alejandro’s car. Unfortunately, when they do, it’s a stick which neither of them can drive. After grinding the gears for a while, they get pulled over by Chuck. He offers to drive and after a multitude of lies about the vehicle and its contents, they have to pull over so Gaby can throw up the chewing tobacco she claimed was hers. That’s when the car gets stolen. ("Secrets That I Never Want to Know")

Bree speaks out about Ben’s low-income housing project, and her charming and persuasive attitude convinces the Board to give the project a green light. Delighted, Ben takes her to the land he’s picked out where they’re going to break ground – the land where the girls buried Alejandro. ("The Art of Making Art")

Bree resorts to some desperate attempts to shut down Ben’s development project. She eggs his house and blames miscreants shouting anti-Australian slurs. She also tries to plant some endangered frogs on the property so the EPA will shut him down. When none of it works, she gets Gaby and Lynette and they decide to dig up and move the body. After being chased through the woods, they come to Alejandro’s burial spot – only someone beat them to it. The body is gone. ("Witch's Lament")

Bree, Gaby and Lynette work it out that Susan is the one that dug up Alejandro. Bree tries to question her indirectly, but the only thing she finds out is that there’s a problem with the construction site. Ben’s workers found the body. Ben decides to call the police and Bree runs to the grave site. Ben follows and she tells him what a horrible person Alejandro was and confesses that she helped bury him. Bree asks Ben to help her cover it up, but he says no. When Bree gets home, Chuck is waiting for her and asks lot of question about Alejandro. Ben comes to the rescue, but Chuck is not put off and tells Ben he made a big mistake. Ben then tells her that he’s gotten rid of the body. Ben asks Mike to dispose of the body. ("Always in Control")

Susan is painting the burial scene. When Felix sees the painting, he wants to put in his gallery, but Susan says she’s not interested. Andre just thinks she’s scared, so he gives Felix the paintings without Susan knowing. Not only did she paint the scene in the woods, but she also painted the candlestick/murder weapon, and the skeleton inside the trunk. Susan tries to remove the paintings and as a last resort, has Gaby and Bree come buy the paintings and have them removed immediately. Chuck followed Bree to the gallery show. He’s putting all the pieces together and is making more threats. When Gaby and Susan find out that Bree was hiding what Chuck has been up to, they get angry as well. ("Suspicion Song")

Sparked by the scene in Susan’s painting, Chuck has called all the girls (minus Bree) down to the station so he can question them. He asks Susan why she painted what she did, showing her a picture of Gabrielle’s stepfather. Susan tries to play dumb, but Chuck doesn’t buy it. When he questions Lynette, he tries to guilt her into admitting the crime by saying that whatever she did is the reason her husband walked out on her, and he does the same to Gabrielle by inflicting guilt on her with Carlos’ alcohol problem. Later, Chuck is run over by a car. ("Putting It Together")

When Susan gets to Alejandro’s house, the house happens to be for sale and its open house day so the realtor invites her in. The realtor tells Susan that Claudia has to sell because her husband disappeared and now she can’t make ends meet. Susan concocts a story about how valuable the Lego toys are and writes Claudia a huge check for them. She tells her not feel sorry for her because her husband is going to come back. What Claudia doesn’t see is in the background, Marisa looks very distraught. Susan waits to catch Marisa alone and talk to her about Alejandro. She understands Marisa was molested by him. Susan promises her that he won’t ever hurt her again. Marisa tells her mother the next day about the conversation with Susan. Claudia is not really happy. ("Who Can Say What's True?")

Claudia shows up at Susan’s house looking for her husband who she believes is having an affair with her. She even posts fliers all over the neighborhood with Alejandro’s photo and calling Susan a home wrecker. When Gaby sees these, Susan confesses visiting Claudia and tells Gaby that she believes Alejandro was molesting Marisa. Gaby asks Susan to bring Claudia over. Gaby tells Claudia the truth about Alejandro molesting her as a child but Claudia will not believe it, until Marisa comes in and tells her he was doing the same to her. Claudia believes her daughter and after seeing the red wine stain on Gaby’s carpet padding, believes Gaby when she says Alejandro will never hurt anyone again. She recommends Gaby to 'hide the stains'. ("What's the Good of Being Good?")

The police discover Alejandro's body, at Ben's construction site. Bree is picked up by a detective from the Fairview Police on her way to the funeral. She recalls how when she was a little girl, her mother taught her about her “mask”. This ability serves her well as she is questioned about the murder of Alejandro. The detective asks her if she killed Mr. Suarez, not covered up the murder and disposed of the body. She leaves, but since she had a cup of coffee, now the department has her fingerprints. ("Women and Death")

Ben is investigated, by the police, after the discovery of the body. Finally, the police decides to listen Bree's calls, when she calls Ben. Their conversation is about the buried body. ("Any Moment") Later, Bree is officially suspected to be Alejandro's murderer. She is took by Heredia at the police station. Trip Weston accepted to be her lawyer, because he thinks she knows who is the true murderer. ("With So Little to Be Sure Of")

Trip speaks with Susan, Lynette and Gabrielle about the trial. Lynette and Susan want to go to the judge and confess, but Gaby doesn't. Susan and Lynette are not happy with Gaby since it seems she’s not losing any sleep over Bree. The following day, during the trial, Susan, Lynette and Gaby are on the stand. They tell that Bree is a good person. Trip's private investigator finds out that Ramon Sanchez really is Gaby's stepfather. He wants Bree to tell the truth, but Bree is reluctant. Gaby shows up after this moment between Trip and Bree to tell her she hasn’t properly thanked her for her sacrifice. ("The People Will Hear")

Ben refuses to answer the prosecution's questions about how he was protecting Bree. Later, the prosecutor questions Renee and, to protect Ben, she tells the court that she saw Bree come home the night of the murder very late covered in mud and leaving, carrying a shovel. After this testimony, Trip again tries to get Bree to tell him the truth. Finally, Bree accepts and tells him it was Carlos and to explain everything that happened that night. Back at the trial, Trip recalls Gaby gets her to confess that the man they all believe to be Ramon Sanchez is actually Alejandro Perez, her stepfather. Later, before Gaby can confess to the murder, Karen gets on the stand. She says the whole neighborhood knew about how Alejandro sexually abused Gaby and when she saw him in the house harassing Gaby, she killed him with the candlestick. Then, the prosecutor dismisses the charges against Bree and Karen. ("Give Me the Blame")

Retrieved from "https://desperatehousewives.fandom.com/wiki/Alejandro_Perez?oldid=90255"
Community content is available under CC-BY-SA unless otherwise noted.