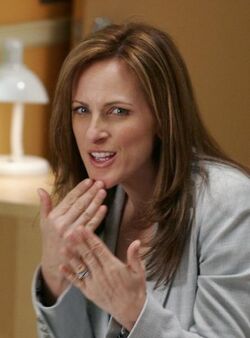 Alisa Stevens is a deaf woman that Lynette Scavo had a brief friendship with. Alisa is portrayed by Marlee Matlin.

They had met at Barcliff Academy and soon began going to lunch together.

Lynette and Tom invited Alisa and her husband over for dinner one night and soon found out that Alisa's husband frequently makes fun of her, knowing that she cannot hear him. Lynette is troubled by this, while Tom prefers not to interfere.

The next day Tom, Lynette, Alisa and her husband all enjoy a round of tennis and once again he begins making fun of her and Lynette get's fed up and confronts him, explaining to him that he needs to stop and that its not cool.

Lynette soon finds out this wasn't the best idea as the next day, Alisa shows up after school and thanks Lynette for interfering with her marriage, she reveals that her husband left her and now she'll have to raise Lily on her own. She then calls her a bitch, and the two never speak again.

Retrieved from "https://desperatehousewives.fandom.com/wiki/Alisa_Stevens?oldid=83348"
Community content is available under CC-BY-SA unless otherwise noted.