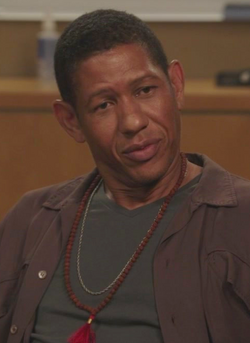 Allen is the man whom Carlos Solis met at the AA facility.

Allen was an Alcoholics Anonymous sponsor, who presumably hosted several AA meetings at the local facilities. He was met by alcoholic Carlos Solis in the episode "Witch's Lament".

Carlos walks into a nearly deserted AA room, which has chairs set out in a circle. A man, Allen, tells him that if he came for the AA meeting, then he missed it, which can be judged by the lack of donuts already. Carlos says he was just looking to talk to somebody, so Allen introduces himself and asks if he wants to talk to him. Carlos explains that he had an "incident" a few nights before, and that he doesn’t remember doing it. Allen jokes that he's lucky, because he was always cursed with the ability to remember every single thing he did during his benders. He then asks how often that happens to Carlos, but the latter says that it's only happened lately. Allen asks what "lately" is, so Carlos answers "two months". Allen asks if something traumatic happened two months before, and as he lists suggestions, Carlos suddenly realizes it was the murder of Alejandro (his wife's malicious stepfather, whom Carlos killed) that's been weighing on him, and his face becomes horrified. However, he immediately puts on a straight face, and tells Allen that there's nothing he can think of. Carlos then says he wasn't sure whether coming there was a good idea, and he gets ready to leave. He then thanks Allen and says he has to go, so Allen gives him his phone number in case he ever wants to talk, night or day. However, as Carlos leaves the room, he sneakily throws the card in the trash bin. ("Witch's Lament")
Retrieved from "https://desperatehousewives.fandom.com/wiki/Allen_(8.06)?oldid=73664"
Community content is available under CC-BY-SA unless otherwise noted.