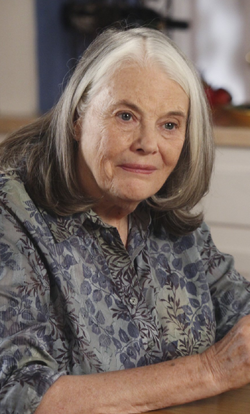 Allison Scavo is the mother of Tom Scavo and his siblings, Peter and Theresa, as well as Rodney Scavo's ex-wife.

Allison is first mentioned, by her daughter-in-law Lynette (Tom's wife), in the season one episode "Your Fault", which features the only physical appearance in the series of Allison's husband Rodney. In it, Lynette discovers that her father-in-law is an adulterous man, and has been that way for many, many years. She is horrified to learn that her husband Tom already knew about it, and doesn't believe his claims that his mother has made peace with it. This leads Lynette to lose her trust in Rodney, and to resent the fact that he's adulterous. Tom tells her he understands she loves his mom, but whatever goes on in their marriage is their own business, and not hers. Lynette then caves in, but gives her husband a warning: she is definitely not like his mother, so if he were to ever cheat on her, she'd grab the kids and leave him and he'd never see any of them again. Tom is shocked by this, and worried.

In the season three episode "My Husband, the Pig", Tom and Lynette Scavo commemorate their ninth wedding anniversary, and Tom states that they have now exceeded his mother's expectations for the duration of their wedding by one year.

Allison makes her first physical appearance in the series (as portrayed by actress Lois Smith) in the episode "Let Me Entertain You". Lynette had demanded that her husband helped her find a new nanny to help look after their newborn daughter, Paige, and thus Tom calls his own mother over to stay with them for a while and help look after the baby girl. Lynette is none too excited about this, and she explains to him that, although she loves his mom, she doesn't love the way he becomes around her, as he turns into a bit of a manchild. This is confirmed the very next morning over breakfast, when Tom asks that his mother make him French toast after she'd already started preparing him eggs. Allison makes the extra effort to please him, which bugs his wife. Allison is happy to pamper her son (whom she calls "Rodney" by mistake at one point, brushing it off on the fact the resembles his father so much). When Allison leaves them for a minute to go and check on a crying Paige, Lynette brings up her issues with Tom around his mom again. He explains that she's old-fashioned and likes to care for her family, and he doesn't see anything wrong with that. When Allison returns, claiming that the young girl is fine, Lynette is further annoyed when Tom taps his coffee mug with his finger, indicating that he wants more coffee. Allison takes the hint, and goes to get him the coffee. Lynette quietly informs her husband that if he ever does that to her, he'll lose his fingers. Later, Tom prepares to leave for a business trip, and Lynette hands him some cookies that his mother made, claiming to be his favorites - Tom notices they're actually his father's favorites. During dinner, Allison tells Lynette that Tom has announced to her that she plans on going back to work - which she then claims not to understand, as it seems nowadays women can't wait to pop out their babies and get back to their silly careers. Lynette decides not to make too much of this. When the boys ask for their beverages, Lynette tells them to get up and fix them themselves, but Allison stands up for them, saying they're tired from school and practice and what-not. She then tells her granddaughter Penny to help her get the drinks. The young girl is confused, and Allison explains that they have to take care of their men. Lynette tells Penny to stay put, and explains to her mother-in-law that in their house the women don't care for the men, the men get up and do what they have to on their own. Allison doesn't understand this lifestyle, and tells her that her husband Rodney never had to wait for anything. Lynette then dismissively tells her that that didn't really do much for Allison, considering he cheated on her and left. Immediately after having said this, Lynette realizes the punch it packed. Allison leaves the kitchen, saddened, and the kids show disappointment in their own mother's words. Lynette regrets what she said too.

When he gets back from his business trip, Tom learns that Lynette has hired a new nanny. He promptly fires her, and lashes out at his wife, telling her she had no right to make his mother feel unwelcome in their house. Lynette explains that she doesn't her kids growing up with a twisted 1950s view on how things should work, but Tom tells her that she's always the one making the decisions, but this time he's making it: his mother's staying.

The following morning, Lynette brings her mother-in-law some coffee and apologizes for her harsh words. Allison too apologized for having overstepped her boundaries, but she explains that it just felt so nice to feel useful again. Lynette tells her she was indeed useful, as she was great with the baby. Allison states that the kitchen was always her favorite room in the house, because in it the family would seat together and eat the meal she prepared with love and care, and she doesn't understand why Lynette would want to give up that to go to work. Lynette simply says "It's just who I am"; Penny walks in and announces that Paige is crying, so Lynette leaves to go check on her youngest daughter, but not before kissing Allison in the cheek. After she goes, Penny notices some cookies, and a confused Allison turns to her and asks what her name is. Penny tells her the name, with a smile, but then looks concerned when her own grandmother asks her if she lives there.

In "Excited and Scared", Halloween is approaching, and Renee Perry arrives at Lynette's house and invites the girls over for a party she's hosting. Allison meets them in the room and asks her daughter-in-law to get her some pearl handcream, because she's run out and her hands are starting to crack and bleed. Lynette promises her she'll get her some, but gives her instructions on when to wake up Paige so that she doesn't oversleep and stay up all night. Allison notices Renee's invitations and demonstrates interest by grabbing one of them, but Renee dismissively snatches it right off her hands, denoting that she's not invited to come. Lynette arrives back home and hands Allison her pearl handcream. Allison thanks her, but Lynette asks her where the baby is, and Allison explains that she is still asleep. Lynette is annoyed because Allison promised to wake the baby at three and complains that Paige will be up all night. "You stop yelling at me," Allison snaps. Lynette insists that she isn't, but Allison shouts: "You're yelling at me, saying it's my fault, and it isn't. You're a liar." That night, Lynette is trying to get Paige off to sleep when she notices Allison's handcream on the table. She takes it into the bathroom to put it away and notices that Allison already has ten jars of the product. She wakes up Tom and admits that she is worried about Allison. Tom suggests that she just forgets things because she is older but Lynette adds that she has moodswings as well. Tom defends Allison, but Lynette says: "I get it - she's your mom, you love her. You can look for excuses for every one of these things but I think there's more going on than just being a little forgetful." She settles down to sleep while Tom looks concerned.

The following morning, Tom asks Allison if she is alright, and explains that she has seemed "scattered" lately. Allison replies that he has always been a worrywart and reminds him of the time he went to camp but wanted to come home because he was worried his family would be hurt by a hurricane. She goes up to get dressed and Tom tells Lynette that his mother is remembering things that he forgot about. Lynette replies that she has been doing research and found out about "sundowning", where people deteroriate later in the day. Tom insists that his mother is not senile, adding that Lynette has been trying to get her out of the house since she arrived. Lynette denies that this is a tactic, adding that she's starting to get worried and isn't comfortable leaving her with the baby. "There's nothing wrong with my mother, OK?" Tom yells. "So just drop it!".

When the children on Wisteria Lane start trick-or-treating, Allison warns that they are about to run out of candy. Tom explains that he has lots left in the cupboard. However, later, Allison repeats that they are running out of candy and decides to go to the store. Penny insists that there is more somewhere but Allison promises her that she will take care of it and leaves as Penny looks on, worried. Later, Tom is watching horror movies with his sons Parker and Porter when the doorbell rings. Tom shouts to Allison but Penny explains that she went out to get more candy. Tom goes to find her, explaining to the children that it's just a little late for Allison to be out. He walks through the crowd of trick-or-treaters looking for her, but doesn't notice her sitting on the curb looking scared.

Meanwhile, Lynette is talking to Lee at Renee's party when she receives a call from Carlos and promises that she will be right there. At the Solis house, she finds Allison sitting on the porch. "Oh, thank God," Allison says. "I was walking, I must have got turned around. I made it up to Claire Graham's place, but the lights were out." Lynette gently tells her that there is no Claire Graham on the street, and suggests that they go home. Tom arrives and watches as Allison snaps, yelling: "Let go of me! You're doing this to me, you're making me feel crazy. I said let go!". She slaps Lynette and immediately apologises. She spots Tom, who says: "It's OK, mom. I'm here." The next morning, Tom announces that the car is loaded and ready to go and Allison replies sadly: "To the nursing home." Tom insists that she is not going to a nursing home, explaining that it is "assisted living", but Allison asks him: "When do I get to leave? When do I get to go home?" She adds that she knows lots of people who have gone to these places and not come back. Tom explains that Allison can't live alone anymore and adds that if something bad happened he would never forgive himself. "The only bad thing happening here is what you're doing to me," Allison tells him. Tom admits that he doesn't know what else to do. "When you called me from that camp you were scared," Allison says. "You kept saying, 'I want to come home, mom'. And I said, 'Tommy, if you mean that, I'll come get you'. That's what you do." She gets up and walks away from then, saddened, and Lynette comforts a tearful Tom.

Retrieved from "https://desperatehousewives.fandom.com/wiki/Allison_Scavo?oldid=85391"
Community content is available under CC-BY-SA unless otherwise noted.