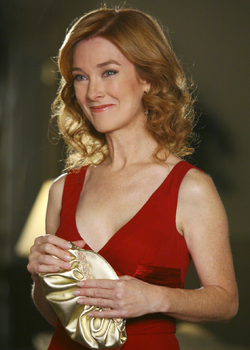 Alma tricked Orson into marrying her by getting pregnant, thinking that having a baby together would make Orson fall in love with her. Unfortunately she had a miscarriage and had trapped herself in a loveless marriage. Despite her strong relationship with her mother-in-law, Gloria, her attempts to make their marriage work were futile, as Orson simply did not love Alma the way she loved him. He later had an affair with Monique Polier, a flight attendant he met on the way back from Paris. When Alma found out about this, she threatens to leave Orson but he does not object so Alma decided she will make him pay by vanishing.

A year after her disappearance, Orson married Bree, and at their engagement party Carolyn Bigsby, Orson's old neighbour, showed up saying that he had murdered Alma, thus arising a wave of suspicion. When Alma returns, Bree faints after knowing she is alive. Alma explains that she mysteriously disappeared because she wanted people to think that her husband had murdered her, so he would feel the pain he caused her. She explains she went to live with a deaf aunt in Winnipeg, Canada, for a year all the while knowing Orson would be a suspect in her disappearance. Happy to know Orson did not murder Alma, Bree invites her to a dinner party with her friends as to make a point of Orson's innocence. Before the party, Alma injects herself with hormones. During dinner, Detective Ridley takes Orson to question him about Monique's murder, and Bree thinks Susan called the police, so she ends their friendship. Alma then buys a house in Wisteria Lane, the one in which Betty Applewhite used to live, and settles in. When the Hodges discover that Alma is their neighbour, Bree wants her husband to get rid of her. Orson goes to talk to her, but Alma manipulates him, blackmailing him over running over Mike Delfino in his car and burying Monique Polier, so he leaves. Alma then trains a parrot to say "Don't tell Bree", and when Bree visits her to tell her to move away, she hears the parrot and drops a glass of lemonade. When reaching for paper to clean it up, Bree discovers a picture of Orson and Monique and a bag containing Monique's teeth hidden under the linoleum. She leaves and gives Orson the teeth. He plants them in Alma's house, stating that she won't find them and that she will now leave them alone, or else he will call the police and tell them that Alma murdered Monique and kept her teeth

Orson receives a phone call from his mother. He goes to Alma's house to find that she attempted suicide by slashing her wrists and even wrote a suicide note, saying that if she can't live with Orson, she doesn't want to live at all. Gloria didn't want to call an ambulance as she'd rather keep it between them. She offers Orson a drink, and he gets dizzy after drinking it. He asks Gloria if she's poisoned him and she feels offended. Orson then notices that Alma is up from the bed, looking well, and wearing lingerie. The two women throw Orson on the bed, and Gloria then leaves them. Alma tells her ex-husband she's been injecting herself with hormones, and it becomes clear she is going to rape him. She then tells her defenseless ex-husband not to struggle, stating that she wants their new baby to be born of "love". She then begins to strip him down as she prepares to carry out this twisted lovemaking. When Bree arrives home, Andrew tells her Orson left to go Alma's, and when she arrives there, she finds the two of them in bed together, with Alma having carried out the depraved act. Bree notices her husband is unconscious and discovers two bottles of pills, one for sleeping and the other for erectile dysfunction. Bree realizes Alma raped Orson so she punches her in the face, knocking Alma out, calls Andrew, and asks him to bring a wheelbarrel, presumably to take Orson home in.

The morning after, Bree tells Orson that Alma raped him, and he finally tells her the truth about what happened with Monique Polier. Orson goes to Alma to tell her it's all over, that he told Bree the truth and that he doesn't need to worry about her anymore. She hopelessly tells him she may be pregnant again, to which he responds that he doesn't care about in the least (considering that it was a product of his rape). Alma then realizes that there Orson will never come back to her and there is nothing else to be done, but Gloria doesn't give up, locking Alma in the attic so she doesn't interfere with her murder plans. After a few days in the attic, Alma tries to escape through the window, but she slips from the roof to her death. Orson discovers her dead body and plants the suicide note and the bag containing Monique's teeth in her house, staging it to seem to Detective Ridley that she killed Monique and committed suicide because of the guilt. The charges against Mike Delfino are dropped, and Bree and Orson go on the honeymoon they had been planning for so long.

When Susan Delfino decides to leave Wisteria Lane with her children, MJ Delfino and Julie Mayer, and granddaughter, Alma's ghost appeared alongside Martha Huber and Bradley Scott, in front of 4351 Wisteria Lane, and they watched the family as they drove away from the lane and began their new lives together. ("Finishing the Hat")

Retrieved from "https://desperatehousewives.fandom.com/wiki/Alma_Hodge?oldid=89623"
Community content is available under CC-BY-SA unless otherwise noted.