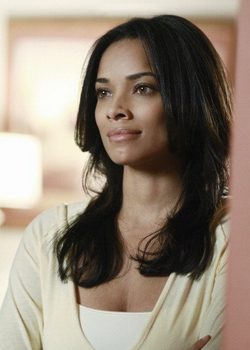 Amber James is Keith Watson's ex-girlfriend, whom he unknowingly had a child with. She comes to Wisteria Lane with the intention to tell Keith about his son.

Amber dated Keith Watson for three years, and seven years prior to him dating Bree. Amber and Keith’s relationship had its up and down, and Amber decided to move out of the apartment they shared together. Shortly after she moved out, she discovered that she was pregnant with their son Charlie James. After deciding to give the baby up for adoption, Amber neglected to tell Keith about his child as she knew he'd try to stop her. However, the moment Amber saw Charlie, she decided she couldn't go through with the adoption and she kept him but still neglected to tell Keith; guilting her for a long time as she knew Charlie needed a father. ("I'm Still Here") When Charlie was six years, Amber went looking for Keith.

Amber arrives to Wisteria Lane looking for Keith Watson, her ex-boyfriend. After questioning Bree and learning that Keith is now living with her, Amber leaves the street distraught. Later, Bree seeks Amber out in her motel room where she soon learns that Amber gave birth to Keith's son, Charlie James, a few months after they broke up and that she thinks he has a right to know about him; but doesn't have the stomach to go through with it. Sensing this could be the end of the wonderful relationship that she and Keith have, knowing how much Keith wants children, Bree lies and tells her that she will talk to him about it.

However, the next day, Amber appears in front of Bree's house looking for her. Quickly rushing past Keith, Bree asks what she wants. Amber claims that the cheque she got from Bree would take a few days to process and that she really needs the money now. Bree agrees to write her a bankers cheque and to meet her the next day at a local pizza restaurant, all the while trying to rush her out of the street before Keith gets suspicious. Amber thanks Bree, but not before asking her to show Keith a picture of his son. Bree quickly agrees and rushes her away while hiding the picture when she gets back in the house.

The next day, Bree arrives at the pizza place and delivers the cheque to Amber. After excuses herself for a moment while she cashes the cheque, so Bree is reluctantly left to look after Charlie. Unbeknownst to Bree, Keith had spotted her car in the Pizza place driveway and enters the place to investigate. After spotting that Bree was looking after a child, Bree lies and says that one of her friends asked her to and then she tries to usher Keith out of the restaurant. Her plan backfires however when Keith starts to play some arcade games with Charlie. Thankfully, Keith leaves just before Amber returns.

Later that evening, haunted by the happy picture of father and son playing together, Bree decides to come clean and shows Keith the picture of Charlie, telling him he is his son. Keith looks on in surprise. ("Flashback")

Amber is later seen picking up Charlie and she flies to Florida with him. Keith, who has since become emotionally attached to Charlie, decides to move to Florida too, after Bree and him mutually split up. ("Farewell Letter")

Retrieved from "https://desperatehousewives.fandom.com/wiki/Amber_James?oldid=89448"
Community content is available under CC-BY-SA unless otherwise noted.