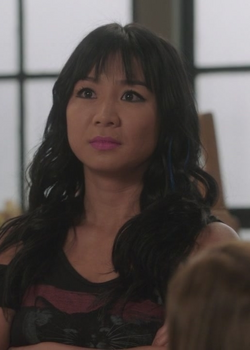 Amy Yamada is one of the students at Andre Zeller's art class, held at the Eagle State College of the Arts.

Amy Yamada is an Asian-American woman who dabbled with arts. She was an art student under the wing of Andre Zeller, a talented yet egotistic and rude painter, and she attended his classes at the Eagle State College of the Arts. Amy's mannerisms are cold and indifferent, and she initially shows little to no reaction of any warm king to her colleague Susan Delfino's clear attempts at bonding with her, out of sheer need to talk to someone in her class about their mean teacher. Amy's father committed suicide, under unknown circumstances, and this occurrence probably drove her to express her emotions via her art.

Susan tells Amy of how Andre doesn't think she's a real artist because she has no real pain, so she plans on showing him off by channelling her pain to her painting, like, for example, working with the fact that her young son left home that morning without saying "goodbye". Amy then reveals to Susan that she's using her father's suicide. Later, when Susan can't stop laughing over the fact that there's a nude model in the classroom, she asks Amy to tell her about her father's suicide, so she can keep her mind off of the current situation. In a following class, when Andre suggests to his students that they all paint in the nude, Amy seems to agree with his idea, nodding affirmatively. However, that plan doesn't amount to anything, except a naked Susan embarrassing herself in front of the entire class, including Amy, who looks amused. ("The Art of Making Art")

Before Halloween, Susan brings Andre a cupcake, which he promptly tosses in the trash. Andre then announces that today is the day he selects his new intern, so Susan, acting ignorant, asks “Is that today?”. Andre says the award won’t be given based on brownie-making, boot-licking, etc... Amy says that covers all of Susan’s moves. Andre goes on to explain the decision will be made on talent and who irritates him the least. Andre then asks Amy to stand up as he announces the winner. After a slight pause, he says he’s chosen Susan. Amy's and Susan’s eyes open wide with confusion, and then Andre asks Amy to sit down. Susan thanks Andre and even says she won’t take her son to soccer practice in order to meet Andre on time, just to make sure Amy doesn’t get the place instead. Later, it's revealed the intership actually consisted of Susan caring for Andre's son, Jasper. ("Witch's Lament")

Amy expresses deep admiration for Andre, telling Susan that she would die for him, an attitude clearly not shared by her classmate. Andre tells Susan that her art hasn't evolved ever since they first met, and adds that Amy is a much better artist, because even though her technique is atrocious, what she does is real, and it bleeds, and he loves it. Amy then says that she would follow him into hell, with conviction. Susan responds that she thinks they already did.

Later, when Susan comes over to Andre's apartment after suffering from a case of painter's block, the doors to his bedroom slide open, and Amy pops up, wearing nothing but her underwear. Susan takes this to mean that this is the reason why Andre likes Amy better in class. Amy takes a beverage with her and walks into the bedroom. He replies that this is why he likes her in bed. He likes her in class because she's a better artist. Susan goes on to say that she is totally adrift in that class. He asks her if it'd help if he told her what grade she'll be getting. She starts babbling about how that's not what she was going for, and he suddenly reveals that she's getting an A. Susan is surprised, and Andre proceeds to joke that she's actually getting an A+, but that's probably not enough for her, she probably also needs to know that everyone else is getting a D. He even tells Amy, loudly, that she's getting a D, to which she simply replies "Okay!". ("Always in Control")


In Amy's last appearance, Andre tells the class that he is going to introduce his art dealer and owner of a local art gallery, Felix Bergman. He pulls back a sliding door and in steps a small, grey-haired man, smartly dressed in a bow-tie and blazer. "I smell fear and mediocrity", Felix Bergman says slowly, as he looks around the classroom at the students. Susan turns to her classmate, Amy, and adds, "Oh no. It's like someone left Andre in the drier too long." Amy tells her to be quiet, and they both return their attention to the critic. Andre explains that Felix is visiting to give his honest feedback on everyone's work and to teach them the business of art.Bergman approaches Amy's easel and arrogantly calls her work (consisting of several squares and circles intertwined) horrible. Andre tries to stick up for Amy (Bergman catches on that Andre is sleeping with her) and picks up the painting and places it in the trash can behind them. Amy looks at the art critic in horror. ("Suspicion Song")

Retrieved from "https://desperatehousewives.fandom.com/wiki/Amy_Yamada?oldid=84266"
Community content is available under CC-BY-SA unless otherwise noted.