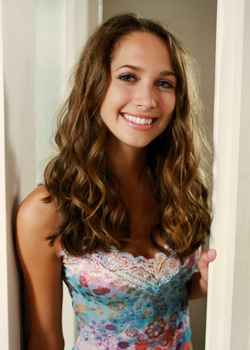 Ana Solis is the niece of Carlos Solis, whom he takes in.

Ana Solis is the daughter of Carlos Solis's first cousin who left Ana and her mother when she was five. Before that Carlos would visit often and have fun with Ana. Ana's mother has since been bouncing in and out of prison. Due to this, Ana has had her childhood ruined and becomes a very rude and conniving diva. Ana eventually moves in with her grandmother, Connie Solis. Connie becomes so sick of her granddaughter's attitude that she acts like she has a bad heart and convinces her nephew, Carlos Solis, and his wife ,Gabrielle Solis, to take in Ana.

Carlos' Aunt, Connie Solis, hosts a family reunion and offers the chance for one of the Solis' to house her granddaughter, Ana. Carlos offers to take her in when no one else can, much to Gaby's dismay. ("Everybody Says Don't")

Ana's cab arrives to Wisteria Lane and she steps out of it, Gaby and Carlos are shocked at the attractitve teenager that comes out. Later, when Ana is unpacking, Gaby tells the girl what her chores are and her curfew, Ana agrees to them all without a fuss and Gaby notices a designer dress in Ana's possessions. She wonders how Ana could afford such a thing and Ana says that they were gifts from her boyfriends. Gaby wonders how many boyfriends she has and Ana tells her that she had to cut back. Gaby worries what Ana does to earn the gifts but Ana assures her that she doesn't have to do anything, the boys merely have to think that she might. Later, Gaby and Carlos go to the store to get groceries and they tell Ana to get started on her chores. When they return, Gaby is shocked at how amazing the house looks and then discovers that Ana got Porter, Preston and Parker Scavo to do the job. She is mad at Ana who blames it on Gaby being jealous of her youth. Ana cries in front of Carlos telling him that Gaby wants to kick her out. This makes Carlos very angry and he yells at his wife. Ana then walks up the stairs and her and Gaby exchange a look... it's on. ("If It's Only in Your Head")

Ana is about to leave for school while wearing a baggy sweatshirt, but Gaby gets suspicious and she tells Ana to lift up her shirt. She then sees that Ana is wearing a very revealing top. Gaby orders Ana to change her outfit immediately. When Ana leaves Carlos offers Gaby the papers which allow them to become the legal guardians for Ana, but she refuses to sign. Later, Gaby sees Ana washing the car and Ana asks her if she can go to a party in a new club but Gaby says no because it doesn't open until 11pm and it's a school night. Later, that night, Gaby checks on Ana and sees that she has snuck out to the party. Gaby then goes to the club and asks the people to search for Ana and if they don't she will call the cops and their drug sniffing dogs. The crowd then pushes Ana to the stage. When Gaby and Ana return home Ana tells Gaby that she can look after herself and is moving out and is going to be a model because Gaby doesn't want her living with her and Carlos. Gaby then storms inside and gets the adoption papers and signs them in front of Ana. Gaby tells Ana that she is going to be watching her like a hawk from then on, 24/7. When Ana calls Gaby mean, Gaby tells Ana that she wishes someone had been this mean to her when she was her age. ("Nice is Different Than Good")

Gabrielle and Carlos are having breakfast when Ana enters the room on the phone with Danny Bolen. She asks Danny to the mall but Danny shoots her down. Gaby tells Ana that the best way to get a guy is to ignore them and that's how she got Carlos. They then hear Karen McCluskey screaming. When Gaby returns home the police arrive and ask Ana where she was the night before. She tells them that her and Danny Bolen went out drinking and that she escaped using the decorative ladder outside. While the handyman is taking the ladder down, he informs her that the ladder would be able to hold very little. Gaby then confronts Ana about this and she admits that she was lying so that Danny would go out with her. Gaby is shocked and demands that she tell the police the truth at once. While Ana is being questioned Gaby runs in to Angie. She tells Angie that Ana was lying about going out drinking with Danny and that she is going to tell the police the truth at that moment. ("Being Alive")

The Solis's and Ana are out to dinner and they run into Gabrielle's former lover, John Rowland, who bought the restaurant after he got his divorce settlement. Ana wants to apply for a job there but Gaby refuses to let her. Carlos uses this as a test against Gaby to see if she still has feelings for John. Gaby ends up letting Ana take the job for John. ("Never Judge a Lady by Her Lover")

John starts dropping Ana off at her house which upsets Gaby because she thinks John is flirting with Ana. When Gaby finds Ana's condoms she finds out Ana plans to have sex with John. Gaby tells John to leave Ana alone. John kisses Gaby and Ana see's. Ana plans to tell Carlos but when Gaby tells Ana about her previous affair with John, Ana decides to keep quiet for Carlos's sake. Ana quits working for John. ("The God-Why-Don't-You-Love-Me Blues")

Ana shows up at the crime scene of the murder of Emily Portsmith with her friends Porter Scavo, Julie Mayer, and Danny Bolen. Ana's crush on Danny continues but he ignores her because of his crush on Julie. ("Would I Think of Suicide")

Ana's friend Julie plans to leave town until they catch the Fairview strangler. Julie offers Ana anything she wants so she'll have less to pack. Ana asks for Danny Bolen because he has a crush on Julie and Ana has a crush on Danny. Ana, Julie, Porter Scavo, and Danny go to see Eddie Orlofsky do comedy. Julie helps Ana by having her and Porter leave so Ana and Danny can get to know each other. Danny tells Ana he thinks she's selfish. Ana lashes out at Danny and he falls for her. Ana and Danny start dating. ("You Gotta Get a Gimmick")

Ana has dinner with Danny and his parents. Angie doesn't like Ana because she doesn't plan to go to college and refuses to eat carbs. Ana and Angie go to the mall to spend time together and Angie and Ana fight. Ana tells Angie that she isn't going anywhere and she understands what Danny is going through. ("How About a Friendly Shrink?)

Gaby is upset to find out Angie lets Danny and Ana be in the same room with the door closed and alone. Gaby bribes Ana with a check, that will pay for modeling school, to not have sex until she finishes high school. Carlos comes home however to find Danny without a shirt on making out with Ana. Carlos is ready to kill Danny when Angie walks in and threatens Carlos. Gaby and Carlos go to make piece with the Bolen's but they hear Nick yelling because Angie almost blew their cover. ("The Glamorous Life")

Gaby and Carlos plan to breakup Ana and Danny. Gaby plans to send Ana to modeling school but she rejects it because of her relationship with Danny. Gaby had Robin Gallagher tell Ana about how she ruined her ballet career for a boy which leads to Ana taking the job and dumping Danny. When Robin finds out what she did she tells Danny who leaves for New York to get Ana back. ("Lovely")

Danny joins Ana in New York while his parents move to Atlanta, Georgia so Danny can see Ana and his grandmother Rose. ("I Guess This is Goodbye")

When Mike Delfino's life flashes before his eyes, Ana is seen in archive footage. ("You Take for Granted")

Retrieved from "https://desperatehousewives.fandom.com/wiki/Ana_Solis?oldid=88958"
Community content is available under CC-BY-SA unless otherwise noted.