Start a Wiki
watch 01:48
The Loop (TV)
Do you like this video?
Another Desperate Housewife 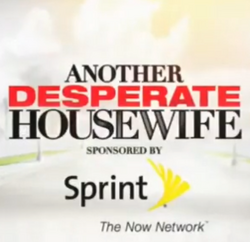 Another Desperate Housewife was a series of eight webisodes (mini-episodes) which were used to advertise mobile network, "Sprint".

The two main characters were Stephanie (played by Rebecca Staab) and Lance (played by David Chisum) who have moved into the former house of Edie Britt after her death. The third character, Elsa (played by Rene Ashton), was Stephanie's friend. As the episodes go on it is revealed that Lance and Elsa have been having an affair. Stephanie finds out and tells Lance to break it off. Elsa suggests killing Stephanie, but Lance gets a text message on his phone indicating he's seeing another woman and a furious Elsa shoots him. In truth, Stephanie sent the message herself. The final mini-episode has Elsa being arrested and Stephanie attracted to a handsome policeman at the scene. Each episode ended with a Mary Alice-like narration saying things such as "This is suspicion on the Now Network" or "This is betrayal on the Now Network".

Retrieved from "https://desperatehousewives.fandom.com/wiki/Another_Desperate_Housewife?oldid=88068"
Community content is available under CC-BY-SA unless otherwise noted.