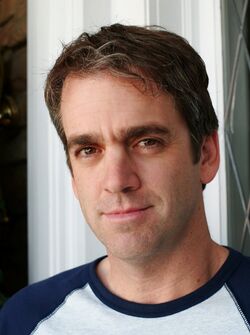 Arthur "Art" Shepard was a resident of Wisteria Lane.

Art was introduced by rescuing Lynette Scavo during a hostage situation in the supermarket. When Carloyn aimed to shoot Lynette and kill her, Art thew a can of soup at Carloyn's head, causing her aim to be off and only shoot Lynette in the shoulder. This act of heroism caused Lynette's son, Parker, to idolize Art. However, it's revealed that while Art pocesses good qualities, it's suspected that he's a pedophile. Lynette discovers this when she inadvertently ends up in his basement. The basement is full of toys and filled from floor to ceiling with polaroids of half-naked boys, even though they're Art's Swim class Students that he's proud of. Lynette then asked Karen McCluskey for advice and soon there were massive demonstrations outside the Shepherd’s house. After Rebecca died, Lynette came to rethink what she'd seen, and begged for Art’s forgiveness. He responded by saying now that she's gone, he can go back to his old ways. He tells Lynette to take care of her 'beautiful' family and informs her that he's moving away. This suggests that he either is a pedophile or is pretending to sound like one as revenge for Lynette ruining his life and causing his sister's death.

1 of 1
Add photo
Retrieved from "https://desperatehousewives.fandom.com/wiki/Art_Shepard?oldid=90300"
Community content is available under CC-BY-SA unless otherwise noted.