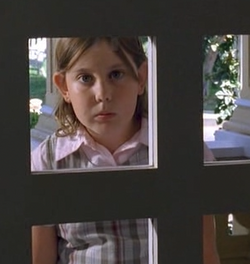 Ashley Bukowski is portrayed by Emily Christine.  Ashley was a new resident of Wisteria Lane, who lives in the Miller’s old house, and she moved there with her mother in 2004. Ashley first encounters Gabrielle Solis when she catches her making out with John after Carlos has left for work.  This startles Ashely who runs away, and Gaby who is afraid she will tell on her.  She searches for Ashley throughout the afternoon, only to find her with her mother, Sheila, and Carlos on her front lawn.  She then realizes that Ashley and her family are her new neighbors. The next day, Gabrielle visits Ashley who is playing with sidewalk chalk and gives her a new doll as a "bribe". In an attempt to keep Ashley from telling Carlos, Gabrielle explains to Ashley that many people can kiss as friends even if they are not married, and that kissing is like giving someone a high-five on the lips. Ashley nods but tells her that she wants a bicycle instead. Later on, Gabrielle gives Ashley a top of the line bike which leads her to ask Gabrielle if she will teach her how to ride. Gabrielle tells her some other time but Ashley wants to learn now. Gabrielle, fearing she has no other choice helps her ride (in her heels) until Ashley gets tired. Ashley says that she would like to do it again tomorrow. Gabrielle reminds Ashley that she has school the following day, prompting Ashley to inform Gabrielle that she is home schooled, so she is always around.

Retrieved from "https://desperatehousewives.fandom.com/wiki/Ashley_Bukowski?oldid=89476"
Community content is available under CC-BY-SA unless otherwise noted.