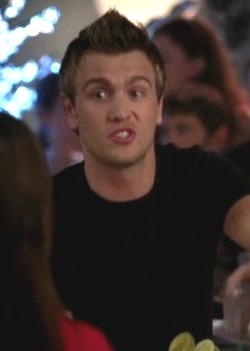 This man was a bartender in a dance club that Edie and Gabrielle visited one night.

Gabrielle and Edie walk through a packed singles club, techno music blares out all around them. As they look for some seats at the bar, Gabrielle says Edie was right about the place being good. Edie then says that there’s a lot of “hotties” at the club, and very few “noties”. The second they sit down, a waiter comes up to them and says some men bought them a drink. Edie is shocked, saying that’s her personal record time, but as she’s about to drink, the waiter explains the drink is for Gabrielle. ("Look Into Their Eyes and You See What They Know")

1 of 1
Add photo
Retrieved from "https://desperatehousewives.fandom.com/wiki/Bartender_in_Dance_Club?oldid=80290"
Community content is available under CC-BY-SA unless otherwise noted.