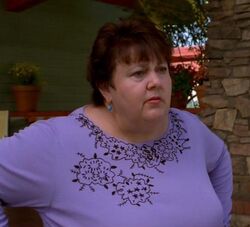 Beefy Middle-Aged Woman is the fandom name given to the unnamed middle-aged woman who judges Lynette Scavo's seemingly poor parenting skills in the episode "Ah, But Underneath".

For a while, Lynette had been trying to get her three young sons, Porter, Preston and Parker Scavo, to behave in the backseat of the car, to sit down quietly and buckle up, but they would never oblige. One day, under the advise of neighbor Martha Huber, Lynette forced her kids to get out of the family van so that she could pretend to abandon them as a sort of punishment. The plan was for her to come back after a short while, but when she did just that, the kids were nowhere to be seen.
Afterwards, Lynette is beyond worried, looking for her children around that unfamiliar neighborhood, and calling out for them. A beefy middle-aged woman comes out of her house and Lynette spots her. She tells the woman she's looking for her children, describes them, and asks if she's seen them. The woman says she did, and she also Lynette drive off without them. Lynette says she was only trying to scare them into behaving, and asks if she saw where they went. The woman lets her know they're in her kitchen, and Lynette is relieved and walks up to her. The woman tells her it seems as though she has some anger management issues. Lynette tells she's got four kids under the age of six, which means she absolutely has anger management issues.

Lynette tries to walk past her and into the house, but the woman stops her, saying she thinks she needs to talk to somebody, because abandoning her children... Lynette interrupts her, saying she didn't abandon them, she came back. The woman insists that it's not normal, and Lynette replies that her kids aren't normal, and she doesn't have time for this, so... the woman keeps her from walking past her, and Lynette calls out for her kids. The woman says she doesn't think they should go anywhere until their mother calms down. They show up behind the glass door, holding cookies, and Lynette tells them to come. The woman tells them to stay put, and grabs Lynette by the arm, telling her they need to have a little talk.

One of the twins yells at her to leave his mommy alone, and Lynette tells the woman to let go of her. Lynette asks her what's her problem, and twin bites the woman in her leg, whereas the other twin pushes her, causing her to fall on the lawn, on top of a hose. Lynette yells at her children to run, and they all rush back to the van. Lynette can see through the rearview mirror that the woman has gotten back up again, and when she turns her head back to tell her kids to buckle up, she sees that they already are doing just that. Lynette turns her head back to the front, realizing they have finally indeed learnt their lesson, and tilts her eyeglasses with some prepotent attitude. She then drives off, as the beefy woman yells that she's calling social services. ("Ah, But Underneath")

Retrieved from "https://desperatehousewives.fandom.com/wiki/Beefy_Middle-Aged_Woman?oldid=78071"
Community content is available under CC-BY-SA unless otherwise noted.