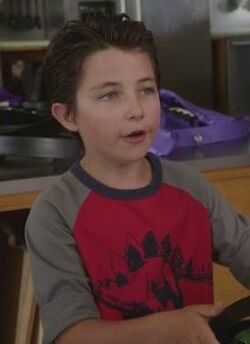 Benjamin Tyson Van de Kamp (formerly Katz and Hodge) is Bree's grandson and the son of Danielle and Austin McCann. It is likely that Benjamin knows about his real father because he met his great-aunt Edie Austin's aunt.

Bree faked a pregnancy to make it seem like he was hers and adopted him immediately after birth to save her daughter (and herself, to some degree) from scandal. Benjamin was born, on October 31, 2007.

Danielle reclaimed her son when he was three years old. He was adopted later by her husband Leo.

Benjamin and Danielle visit Bree just as she is about to go to a concert with her new boyfriend, Keith.

Benjamin and Danielle return to Wisteria Lane in the episode "School of Hard Knocks" after his adopted father, Leo, leaves his mother. He is seen carting in Danielle's exorbitant luggage and also in helping her construct the sex swings that Danielle is selling on the internet under the guise of exercise equipment.

Benjamin Van de Kamp has had three fathers over the course of the show;

Retrieved from "https://desperatehousewives.fandom.com/wiki/Benjamin_Van_de_Kamp?oldid=90327"
Community content is available under CC-BY-SA unless otherwise noted.