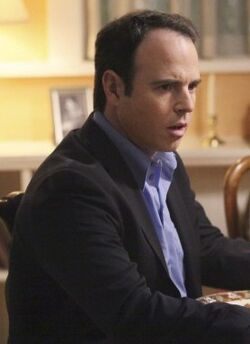 Bill is the potential foster father who met with Julie Mayer - and her mother, Susan - in the episode "Is This What You Call Love?".

One day, Julie Mayer, who's pregnant with an unwanted child, comes home to her mother to announce that she has planned to give the baby up for adoption, and a potential foster couple wants to meet with her and Susan the following night.


The following night, Susan and Julie are sat at the dinner table with Bill and Debbie, the potential foster couple. Debbie tells Susan the meal was delicious, and Susan says it was just something she whipped up. Bil proposes a toast to Susan and Julie, for inviting them into their beautiful home and offering them this amazing gift of life. They all share in on the toast, and Susan notices Debbie is only drinking water. She asks her if she's not drinking, and Debbie explains that she's abstaining in a show of solidarity with Julie. She may not be able to carry her own baby, but she is able to support the woman who is. Julie smiles at her, and Susan tells her that's very sweet, but then jokes that she should drop that plan when the doctor starts talking about 'episiotomy'. The couple chuckles, and Bill tells Susan he can't believe how great she's being about this, and Debbie tells Julie that it's wonderful that her mother is so supportive. Julie tells them Susan understands how this is going to be better for everyone. Susan says that she can't think of a better home for this baby than with Bill and Debbie... but she's not too confident in her own words. Bill and Debbie are touched. Susan then turns to Julie and asks if she would mind getting the dessert. Julie gets up, and tells Debbie that if she is peeing in solidarity with her, that's where she'll be heading first. Debbie and Bill laugh. Debbie turns to Susan, after Julie's headed out, to compliment the job she did with her daughter, as she seems great. Susan takes the opportunity to say that Julie's having one of her good days. The couple is alarmed, and Susan explains that Dr. Cohen finally got her meds perfectly balanced... which is why she's letting Julie use a knife that night. Debbie starts saying that Julie never mentioned anything in her application about... "mental illness?", adds Susan. "Yeah... Grandma used to say our family tree grew nothing but bananas.", she says... before adding, "Before she hung herself." The couple is concerned, and Bill tells Susan that he thinks, legally, Julie had to disclose that to them. Susan then tells them not to talk about 'legal' next to Julie, because otherwise they'll have to see all of her jail tattoos. Debbie is frightened, and Bill asks Susan what else Julie didn't tell them. Susan asks them if she said she can hold up her hand over an open flame without crying. Her eyes water, but she just keeps laughing. Susan then tells them it's not Julie's fault, as she should have stopped drinking when she was pregnant, but she 'likes her whine'. She then drinks some more. Julie returns, with a plate of cake, and asks who's ready for dessert, before holding her knife up in the air, which startles Bill and Debbie. It is then revealed that the couple decided against adopting Julie's child.("Is This What You Call Love?")

1 of 3
Add photo
Retrieved from "https://desperatehousewives.fandom.com/wiki/Bill_(8.13)?oldid=84280"
Community content is available under CC-BY-SA unless otherwise noted.