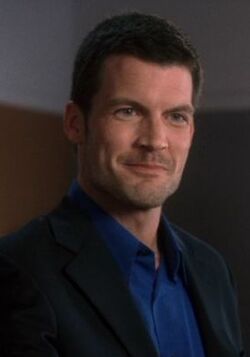 When they arrive home from a date, Gabrielle finds roses on her doorstep from Zach Young (albeit, Gaby does not know this yet), however Gaby assumes that they are from Carlos and confronts him. She later goes to the florist to find out who sent the flowers but the florist will not reveal it to her as the person asked to remain annonymous. Gaby then imprisons the florist and begins rifleing through her receipts, Bill walks in at this point and breaks up with Gaby as she is still hung up on her ex-husband, he is then hit-on by the florist, briefly.

Retrieved from "https://desperatehousewives.fandom.com/wiki/Bill_Pearce?oldid=86190"
Community content is available under CC-BY-SA unless otherwise noted.