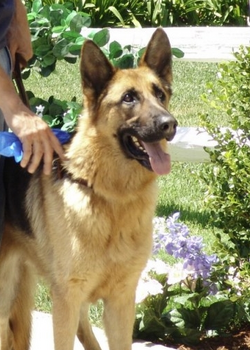 Bongo was a young German Shephard who was Mike Delfino's pet dog.

Mike invites both Susan Mayer and Edie Britt over for dinner, and the latter uses the dog's affections to make a good impression on Mike, which angers Susan, who later comes up with the idea of applying gravy on her hands and ears to get the dog to lick her and appear as if it likes her. Mike is impressed, but Bongo accidentally ingests Susan's earring, and it has to be rushed to the veterinarian. Mike is upset at Susan, but they eventually make up for it, and she offers him a squeaky bone to give Bongo. ("Ah, But Underneath")

Susan heads over to Mike's house to feed Bongo, while its owner is away, and finds Zach Young yielding a gun, prepared to take revenge on Mike over taking his father away in order to kill him. Bongo appears to be scared of Zach. ("One Wonderful Day")

After Mike gets home, Susan manages to overpower Zach, but Bongo bites her pants, and she is accidentally thrown into the couch, forcing her to shoot through the window. ("Next")

Bongo becomes startled by a strange presence outside during the night, which leads Mike to step outside and see Caleb Applewhite. Caleb starts running but Mike follows him and soon tackles Caleb, who was a fugitive. ("The Sun Won't Set")

Bongo disappeared from Desperate Housewives, and the writing off of that character has never been addressed in the show. Series creator Marc Cherry has said that Bongo was cut from the series because of budget problems. He said that in the storyline, Bongo probably passed away, or was given away, while Mike was in the coma during season 3.

Retrieved from "https://desperatehousewives.fandom.com/wiki/Bongo?oldid=86229"
Community content is available under CC-BY-SA unless otherwise noted.