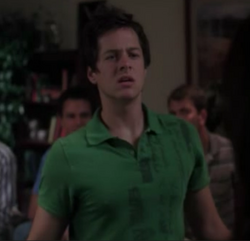 Boomer hangs out with some other friends of Matt at his friend's birthday party. When Susan follows Matt to his room, Boomer claims that he wasn't the one to invite a "stripper", and then yells at Susan, telling her to "take it off". After he finds out that Susan's pregnant, he shows himself disgusted.

Retrieved from "https://desperatehousewives.fandom.com/wiki/Boomer?oldid=67936"
Community content is available under CC-BY-SA unless otherwise noted.