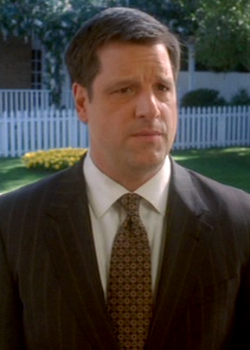 Gabrielle runs into Bradley whilst shopping in the mall and he tells her that he used to work for Carlos. Gabrielle remembers him and the two catch up with Gabrielle informing Bradley that Carlos's sight is back and that hes just looking for a job. Bradley tells Gabrielle he runs a company now and that Carlos is welcome to a job there. Gabrielle at first tells him she cannot speak for Carlos but when he tells her the pay is very high she accepts for him. When Gabrielle tells Carlos about the job he rejects it as he already has a job working for the blind. Gabrielle goes behind his back and invites Bradley and his wife Maria down for dinner in order to convince Carlos to take the job. At dinner Carlos tells Bradley he wants to work with the blind - and Maria who gets drunk tells Gabrielle that her husband and his job isn't cracked out to what she thinks it is, she appears to be very mad with Bradley even saying to him she has a picture of their kids in her purse, can you name them? Bradley tries to calm her down but Maria informs him that she wants a divorce and then she leaves. ("Home is the Place")

Maria and Bradley's relationship appears to be great and back on track and they take Gabrielle and Carlos out for meal, however Bradley reveals to them that Carlos along with everyone else won't be getting a big bonus this year. Gabrielle is disappointed, whilst out buying jelwary Gabrielle notcies Bradley walk past the shop and she rushes out to say hello and she spots him kissing another woman. Bradley sees her and is shocked and worried and he drives off. When Gabrielle gets home Bradley is there and he has offered Carlos the bonus afterall. Gabrielle without Carlos noticing manages to blackmail Bradley into raising his bonus even higher - which he does. Bradley then tells them that seeing as Carlos is the only one getting a bonus that they should keep it quiet and Gabrielle agrees. Maria later drops by and she and Gabrielle have drinks together, Maria tells Gabrielle that their marriage is going so well that they've even stopped going counciling. Gabrielle aware of Bradley's affair tries to convince Maria that they should still do the counciling in hope Bradley would be honest with her. Carlos over hears this and in private asks Gabrielle whats going on - Gabrielle confesses everything to him and stops him from telling Maria the truth. Later, Maria reveals to them she's pregnant and that she would love for Gabrielle and Carlos to be godparents. Gabrielle then begins to feel even more guilty. ("In a World Where the Kings Are Employers")

Gabrielle has enough of covering for Bradley and decides to go and talk to his mistress Shayla Grove and try to talk her out of the affair which is unsuccessful. Bradley then confronts Gabrielle about this and she tells him that either he can tell Maria the truth or she will. Bradley tells Gabrielle to tell Carlos that he is fired. Later on, Maria is preparing food with Bradley and talking about plans for the baby. However, Bradley tells her that they need to talk. Maria calls Carlos and Gabrielle asking them to come round. When they do, they find that Maria had stabbed Bradley in the back in a fit of rage. Gabrielle tries to comfort the devastated Maria while Carlos calls the police. ("Crime Doesn't Pay")

Carlos and Gaby attend Bradley's funeral. Gaby doesn't want to stay because people are prying for information on Bradley's murder. Carlos tells Gaby that he cannot leave early because most of the people at the funeral are his co-workers and Gaby reminds him that Bradley fired him but Carlos also reminds Gaby that he was killed eight hours later. Before the funeral begins, Carlos is approached by Owen Johnson, the CEO and tells Carlos that Bradley called him to discuss Carlos and before he had a chance to return the call, Bradley was dead so Owen believes Bradley wanted to promote Carlos not knowing it was his job he would be promoted to. ("The Story of Lucy and Jessie")

When Susan Delfino decides to leave Wisteria Lane with her children, MJ Delfino and Julie Mayer, and granddaughter, Bradley's ghost appears alongside Alma Hodge and Martha Huber, in front of 4351 Wisteria Lane, and they watch the family as they drive away from the lane and begin their new lives together. ("Finishing the Hat")

Retrieved from "https://desperatehousewives.fandom.com/wiki/Bradley_Scott?oldid=89625"
Community content is available under CC-BY-SA unless otherwise noted.