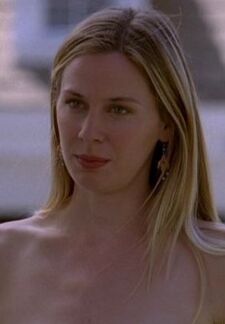 Brandi was Karl Mayer's secretary, who became his mistress.

Brandi is Karl's secretary and mistress. As a result of Karl's affair with Brandi, Susan and Karl divorced in 2003, a year prior to the start of the series.

In "Pretty Little Picture", Brandi apologizes to Susan for having cheated with Karl, explaining that she thought their marriage was already over.

Later in the first season, in “Move On”, Karl reveals that Brandi has left him sending him back briefly into the arms of his wife. When Karl asks Susan for a second chance, she declines, stating that she is committed to Mike . The character is referenced several times throughout the series, usually when Susan and Karl get into childish arguments.

Retrieved from "https://desperatehousewives.fandom.com/wiki/Brandi?oldid=89480"
Community content is available under CC-BY-SA unless otherwise noted.