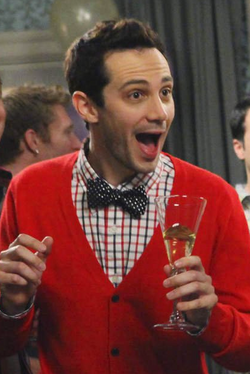 Bryan is one of Andrew's gay friends, who was invited by Bree for Andrew's party, which was really his engagement party, with Mary Beth. Both he and Andrew's other gay friend, Brian, were really surprised when they learned Mary Beth is Andrew's fiancée.

Bree approaches Andrew and Mary Beth who are getting out of a car, and she thanks them for accepting her apology and visiting before they leave time. She tells them she hasn’t had the appropriate reaction to their wedding, but Mary Beth assures her she’s been wonderful. Bree leads the couple inside and explains she’s thrown a surprise engagement party to show her support. She opens the door and the music pours out. They enter the front room to find lots of gay men dancing together. When they see Andrew, they wave flirtatiously at him. Shocked, Andrew asks what she’s done, so she explains she just invited a few friends over. Two of the men approach Andrew and in the most flamboyant way possible, they greet him. One of them asks who Mary Beth is, so Bree explains she’s Andrew’s fiancée. The two men are stunned for a moment and then they introduce each other as Brian, with an “i” and Bryan, with a “y”. Bryan suddenly takes Andrew into the other room to get details on his wedding. Brian and a group of other men follow him. As he is led away, Andrew tells Mary Beth to get a drink from the kitchen. ("Any Moment")

1 of 5
Add photo
Retrieved from "https://desperatehousewives.fandom.com/wiki/Bryan_(8.18)?oldid=86916"
Community content is available under CC-BY-SA unless otherwise noted.