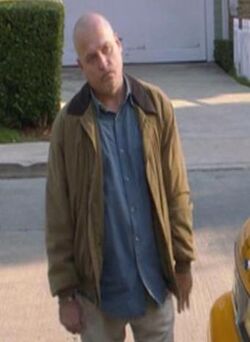 The cab driver featured in the episode "What's to Discuss, Old Friend?" was an unnamed cabbie who was sent to the Delfino house to pick up Susan Delfino on two different occasions.

Mike Delfino wakes up one morning to find his wife Susan heading towards a cab. Outside, Susan asks the cabbie if he'll help her with her bag, and he nods affirmatively. Mike walks out of the house, wearing nothing but his pyjama bottoms, and says "No! No, nobody's helping her with her bag." After an argument, Mike takes Susan's suitcase inside, refusing to let her go, and she asks the cabbie to wait a sec. Afterwards, Mike tries to convince Susan not go, and her girlfriends show up to give her some info that keeps her from going, so the cabbie has been presumably dismissed by then.

Later, in another morning, Mike wakes up to, yet again, find Susan in a rather similar situation, about to enter a cab to take her to the airport. Outside the house, Mike walks out, wearing nothing but his pyjama bottoms, again, and asks his wife what she thinks she's doing. The cab driver says he remembers this house: the half-naked guy comes out and he doesn't get his fare. He proceeds to remove the suitcase from the trunk, but Susan stops him, saying he'll get his fare this time. After some talk with her husband, she turns to the cabbie and asks for two minutes, so he shuts the trunk and gets into the car, so the Delfinos can continue their conversation in private. After a while, they hug and part ways, as Susan gets into the car and it drives off, but not before stopping for a while so Susan and Gaby can chat.

Retrieved from "https://desperatehousewives.fandom.com/wiki/Cab_Driver_(8.10)?oldid=84295"
Community content is available under CC-BY-SA unless otherwise noted.