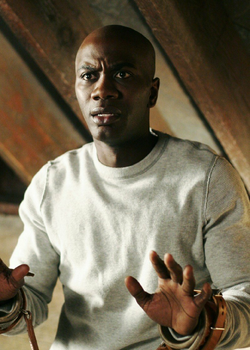 Caleb Applewhite is Betty's son, and brother of Matthew.

Before the Applewhites moved to Fairview in 2004, Matthew was dating a young woman named Melanie Foster. He tried to break up with her, but she wouldn't let go.

Melanie asked Matthew to meet at the Lumberjack warehouse garden, but Caleb turned up first and told Melanie that he loved her. However, she laughed in his face, thinking that it was a joke.

When Caleb then tries to kiss her, she realizes that he is serious, before slapping him and hitting him with a pole. Caleb got scared and after a struggle, he hit her with it over the head which caused Melanie to fall.

Thinking that he killed her, Caleb flees. Matthew returned later and told Melanie (who was still alive) that Caleb didn't mean to do what he did, but Melanie tells him unless they get back together, she's going to the police.

Matthew begged Melanie not to say anything, but she walks away. He hit her with the pole three times, which killed the young woman, and he placed his jacket on her.

Matthew and Betty locked Caleb in the basement as punishment for Melanie's death, but neither Betty nor Caleb knew that Matthew was the real killer.

Matthew began dating Danielle Van De Kamp, which her mother Bree is not happy about. Caleb briefly escaped his imprisonment which led to him intruding the Solis household.

When Gaby sees Caleb in her bedroom, she screams and attempts to escape, but falls down the staircase thus having a miscarriage.

He is later arrested and due to his handicap, he is placed in a mental facility. Betty learns this and her and Matthew manage to break him free.

Danielle is not happy to learn about Caleb's past, so Matthew and Danielle created a plan to get Caleb out of the way and put into a home by Matthew telling Caleb that Danielle liked him and she wanted to kiss him; Caleb did so, but Danielle panicked and Bree entered with her gun.

Then, Betty decides to kill Caleb peacefully with poisoned ice cream, but when Caleb tells Betty that Matthew said he should go to Danielle's room, she did not kill Caleb, but locked Matthew in the basement instead.

Retrieved from "https://desperatehousewives.fandom.com/wiki/Caleb_Applewhite?oldid=89374"
Community content is available under CC-BY-SA unless otherwise noted.