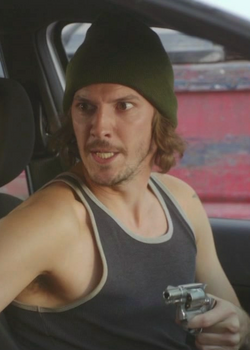 The carjacker was a guy who stole Alejandro's car, unbeknownst to the fact that the car belong to a murder victim.

Bree Van de Kamp and Gabrielle Solis had been trying to get rid of Alejandro's car, to keep from being caught by the police as participants in his murder's cover-up. However, Bree's boyfriend, detective Chuck Vance, had managed to make his way into the car as well, but he soon parks it and leaves to help Gabrielle spit out some chewable tobacco.

In the car, a worried-looking Bree is startled by an assailant who steps in, yielding a gun, and telling her to get out. Bree asks "What?", and he tells her he's taking her car. Bree is filled with joy, and tells the carjacker she could kiss him. The man doesn't understand her reaction, and tells her to just get out. Bree shooshes him, telling him to keep his voice down because the man behind them is a cop. The carjacker is scared, and starts to get out of the car, but Bree stops him, saying "When you start something, young man, you see it through."; she then unbuckles herself and gets out the car, telling the man to "buckle up". He does so, and drives away, with a confused look on his face. Gaby and Chuck are surprised to see the car in motion, and he asks his girlfriend what happened. Bree thinks about it for a second and tells them Shirley just happened to be walking by. Chuck and Gaby are still confused. ("Secrets That I Never Want to Know")

Retrieved from "https://desperatehousewives.fandom.com/wiki/Carjacker_(8.01)?oldid=74410"
Community content is available under CC-BY-SA unless otherwise noted.