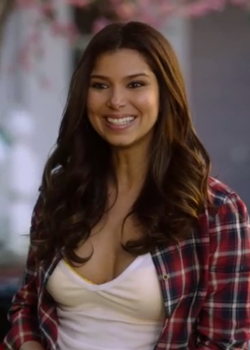 Carmen is a gardener whom Carlos Solis hired in order to prove a point to his wife.

Gabrielle Solis walks out of her house one morning, dressed for work, as her husband Carlos reads the morning paper out on the front porch. She tells him she has a long day ahead of him, and e-mails have been coming in since 7 a.m. Carlos tells her their new gardener started that day, and Gaby asks him to cover that for her, as she doesn't have time to talk to the help. He says it'd be his pleasure and Gaby walks out, checking her phone... until her peripheral vision catches something rather surprising, that makes her stop cold on her track. The new gardener is female, young, curvy and voluptuous.

She introduces herself as Carmen ("Hola. I'm Carmen."), and the only response Gaby can give her is a dismissive and reprehensive "Uh uh." She heads back up the steps to confront her husband, asking him "What the hell is that?!", to which Carlos simply replies it's their new gardener... who's gonna take care of everything around there that's been neglected. Gaby, angry with him, says "Oh, you think that's funny?". Carlos says he's just making a point, and Gaby tells him he crossed the line, twice, and then she storms off; Carlos tries to chase after her, but she gets into her car and really hits the pedal as she drives away. Carlos then catches the new gardener giving him a flirty look and bouncing her hips a little, which throws him off a bit, and he heads back inside the house. ("Finishing the Hat")

Retrieved from "https://desperatehousewives.fandom.com/wiki/Carmen_(8.23)?oldid=88137"
Community content is available under CC-BY-SA unless otherwise noted.