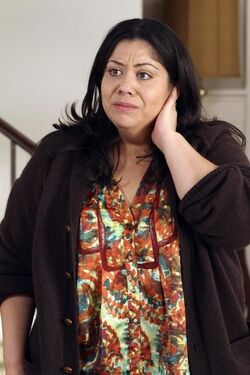 At some point in her life, Carmen crossed the border from Mexico into the United States of America, making her way to Fairview along the way. Whilst in America, she met Hector Sanchez and evenutally married him. Some time after the marriage, Carmen fell pregnant and gave birth to Juanita Solis in Fairview Memorial Hospital. However, due to a mix up by drunken nurse Teresa Pruitt, Grace and Juanita were switched at birth resulting in Gabrielle raising Juanita and Carmen raising Grace. ("Pleasant Little Kingdom"/"Sorry Grateful")

Carmen is at the park to meet with Gabrielle and Carlos for the first time, whilst Grace throws a tantrum over Carmen bringing her the wrong colored jacket. Carmen, Gaby, Carlos and Hector are sitting at a park bench discussing what is best for the children, and so they decide to meet with each other every month which Carmen is reluctant to do. When Grace comments on the price of Gaby's purse, Carmen scolds her and tells her not to ask about money. Carmen judges Gaby, thinking of her as a bad mother. Gaby later buys Grace a $1,200 purse and attempts to deliver it to her at the Sanchez household.

Carmen answers the door and refuses to take the bag, claiming that she has a perfectly good one which she brought from the flea market.A few days later, Hector and Carmen visit the Solis' so that both families can spend time with their daughters. Carmen spends the time teaching Juanita how to cook, preparing a Mexican dish. ("The Thing That Counts is What's Inside")

Juanita and Grace are playing in Grace's room when Gabrielle arrives to pick Juanita up. Carmen goes to Grace's room to tell Juanita to come downstairs. ("Excited and Scared")

1 of 5
Add photo
Retrieved from "https://desperatehousewives.fandom.com/wiki/Carmen_Sanchez?oldid=79631"
Community content is available under CC-BY-SA unless otherwise noted.