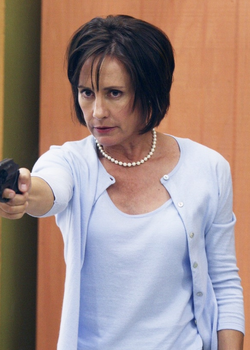 Carolyn Bigsby was Orson Hodge's nosy ex-neighbor who after realizing her husband was cheating on her, took shoppers in the Fairview Supermarket hostage. She attempted to shoot to kill Lynette Scavo, but was hit in the head with a can of soup by Art Shepard, which caused the bullet to merely wound Lynette in the shoulder. She was later shot in the head by Maya.

When Carolyn comes over to Alma's house, she catches Orson thoroughly cleaning the house, and after learning that Alma was missing after she left Orson, she became suspicious that Orson killed Alma. Carolyn warns Bree about him, but Bree marries him anyway. At Bree's engagement party, Carolyn once again starts bad-mouthing Orson. Bree asks Carolyn to leave, so she does. ("Listen to the Rain on the Roof")

When Susan becomes suspicious of Orson as well, she goes to the place where Carolyn works to try and get the full story. Carolyn tells Susan everything. After the wedding, Carolyn is called down to the morgue to identify a body that could be Alma. When the officer pull the sheet off, she learns that it is not Alma, but someone else. As Orson and Bree start to talk out the door, Carolyn points at them and says "He's a cold blooded killer!", referring to Orson. ("Like It Was")

Carolyn comes over to Bree's house to apologize for being so rude to them. Her husband introduces himself as Harvey Bigsby. He suggests they all go out to dinner together. While at dinner, Carolyn tells Bree to come to the powder room with her. While she is in there she shows her a photo of a bruised Alma. Carolyn then tells Bree that was a photo from a police report Alma filed after Orson hit her. Bree is shocked by this and left speechless. Carolyn and Bree then leave and return to dinner. ("Sweetheart, I Have to Confess")

When Carolyn learns of Harvey's affair, she brings a gun to the market he works at trying to kill him. She holds the customers in the market hostage. When Nora tells Carolyn how Lynette is suing for custody, Lynette reveals that Nora tried to seduce her husband. Carolyn raises the gun and shoots Nora in the chest. When Niora dies from blood loss, Lynette grows angry and says Carolyn deserved to be cheated on. Lynette realizes her mistake and attempts to apologize. Carolyn raises the gun to shoot Lynette, however Art Shepard throws a can of soup at her head causing her to fall and the bullet to hit Lynette in the shoulder. After much struggle trying to get the gun back, Maya picks it up and shoots Carolyn in the head, instantly killing her. ("Bang")

Carolyn was portrayed by Laurie Metcalfe, who was known as a comedic actress.

Retrieved from "https://desperatehousewives.fandom.com/wiki/Carolyn_Bigsby?oldid=89250"
Community content is available under CC-BY-SA unless otherwise noted.