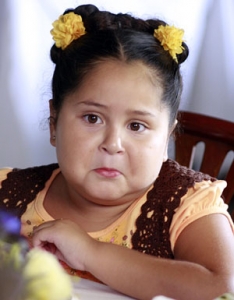 Celia Solis is the youngest daughter of Gabrielle and Carlos Solis biological sister of Grace Sanchez and legal sister of Juanita Solis . She is often quiet, but she enjoys rebelling against her mother with her older sister Juanita.

Celia was born in Fairview Memorial Hospital to Gabrielle and Carlos Solis.

Like her sister, Celia was born during the five-year-jump. She is quieter and more soft spoken than her older sister. At one point, she responds to every question Gabrielle asks with a nod, prompting Gabrielle to suggest she should get Celia tested.

The Solis family are all at the Christmas Block Party just as the plane carrying Karl's message for Bree is crashing into Wisteria Lane.

Carlos and Juanita manage to get away, but Celia doesn't move in a state of shock just as the plane is coming towards her.

Gabrielle tries to save her but frantic citizens are blocking her way. Just when the plane is seconds away from killing her, Lynette pushes her out of the way.

Although Celia is fine, Lynette loses one of the twin babies she is pregnant with. ("Boom Crunch")

Gabrielle contemplates that God saved Celia, and that she is special. In a flash forward 5 to 10 years, Carlos and Gabrielle fight over Celia.

While Celia would prefer to go to summer camp, Gabrielle demands that she audition for "Annie" which she has to oblige to.

In a flash-forward 20 to 25 years, Carlos and Juanita have left the house. Gabrielle is seen watching Celia's one successful commercial and then asks Celia to audition for another.

This makes Celia tell Gabrielle that her being spared in a plane crash is not a big deal. ("If...")

Celia has the chicken pox which Gabrielle has never had, so she goes to stay with Bob and Lee whilst Carlos takes care of Celia. ("The Chase")

Celia is seen playing in the park with Juanita and Grace, whilst her parents are sitting with Hector and Carmen Sanchez. ("The Thing That Counts is What's Inside")

Celia goes trick-or-treating with Juanita, Grace and Gabrielle dressed as a cat with her sister dressed as a dog.

Later in the evening, Gabrielle is seen cleaning her "fur" and takes her for a bath. ("Excited and Scared")

Little is seen of Celia in Season 8 other than she has become a much better behaved child to Gabrielle, along with Juanita. Like her sister, she's shown to be scared of Roy Bender and his stories about war. She also seems to be well-known around the neighborhood as a troublemaker.

1 of 3
Add photo
Retrieved from "https://desperatehousewives.fandom.com/wiki/Celia_Solis?oldid=89407"
Community content is available under CC-BY-SA unless otherwise noted.