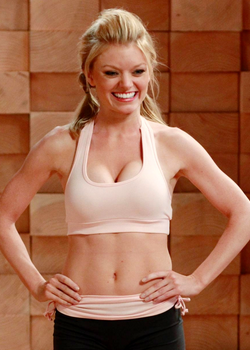 Chloe Carlson is the daughter of Jane, Tom's girlfriend.

Chloe was born to Jane and her husband, who cheated on his wife with their Swedish au pair. Upon their separation, around the time when Chloe was 13 years old, Jane tried to compensate her by getting her a car, despite her young age.

At age 20, Chloe works as a fitness instructor, an aromatherapist and a lingerie model.

Following the separation of Tom and Lynette Scavo, the latter gives their daughter, Penny, a Tablet, with which they can communicate with each other. When Penny's over at her father's house, Lynette makes Penny stand up, hold the tablet up in front of her and show her the sights. Lynette starts gazing at all the details and decoration, and demands that her daughter stop when she notices Tom talking to a hot blonde 20-year-old outside, through the window. Lynette asks Penny who that is, and she tells her it's Chloe, who also lives in the building and who is really nice. Lynette asks if Chloe is around a lot, to which Penny replies "sometimes", adding that she teaches a booty burning ballet class, so she's usually mostly at the fitness center. Lynette tells her she's seen enough, and logs off.
Another day, Lynette convinces her best friend Renee to come with her to the ballet class so she can check out the 'competition'. Lynette doesn't think it should be too hard. Later, in class, it proves to be too hard indeed, as the two friends are exhausted from all the exercising. Renee asks Lynette if she's the only one about to pass out. Unbeknownst to Lynette, Tom's actual girlfriend, Jane, Chloe's mother, is performing the exercises right next to her. Chloe tells them to get on their feet. Renee asks Lynette if they can go now, considering that they've already checked out the competition. Lynette responds that she wants to talk to Chloe. The instructor tells them it's time to work on their quads, and Renee tells her friend that she doesn't know who she hates more at that time, her or the instructor. Chloe tells them to perform 50 lunges. Renee announces that she's the winner.
Lynette is seen talking to Chloe, who'd been filling her in on her three careers: as a fitness instructor, an aromatherapist and a lingerie model. Chloe explains to Lynette that lingerie modeling is more of a hobby then a career. Lynette makes a crack about her breasts, which upsets Chloe, and then insists that she was joking, and leaves, telling Chloe it was nice talking to her. Renee asks her how it went, and Lynette explains that obviously she's not thrilled, but it could be worst: Chloe could look like that and have a single thought in her head. She doesn't think that Tom will ever get serious with a woman like that, so she gives the whole thing three months. Tom shows up in front of them, and is surprised to see them there. Renee tells Lynette she'll meet her at the car and leaves, and Lynette reveals to Tom that she knows. Tom then fesses up, saying it's only been a few dinner dates, and Lynette doesn't want to hear it. She thinks less of him for dating the underwear model, and Tom reveals to her that he's picking up Jane, Chloe's mother, who is the woman he's been dating. Lynette is surprised to learn that it's the nice doctor she was previously talking to. ("School of Hard Knocks")


Another time, following detective Chuck Vance's suspicions that the women are all involved in a murder cover-up, Lynette tries to reach her husband. Over at Tom's apartment, Lynette is stood outside the main doors, trying to ring Tom's room with the radio outside. There’s no answer, so Lynette rings another resident's room; a woman answers. Lynette puts on a Mexican accent and says she forgot her key to Tom’s apartment and asks to be let in. The woman says Tom isn’t there, so Lynette explains that she's a maid. Suddenly, Chloe, Jane’s daughter, arrives, listening to Lynette and tells her she’s pathetic for impersonating a maid stereotype. Lynette tells Chloe that she knows Tom and Jane are leaving for Paris, but asks to speak to Tom for five minutes. However, Chloe says they left for the airport one hour ago. Lynette asks Chloe if she knows the flight name because she tried ringing Tom and he wasn't answering, making Chloe call her a stalker. Lynette says she isn't a stalker, so Chloe tells her she knows about the “hiding under the bed incident”. Lynette then says that something happened and Tom needed to be there for the children’s sake. Chloe gives in and takes Lynette to her room to give her the flight information. ("Putting It Together")

Retrieved from "https://desperatehousewives.fandom.com/wiki/Chloe_Carlson?oldid=73448"
Community content is available under CC-BY-SA unless otherwise noted.