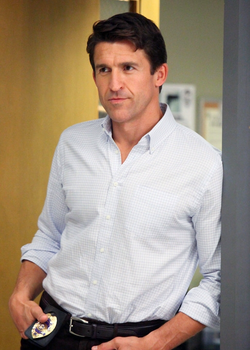 Chuck was born in Pennsylvania. He later attended college where he was a rivaled sportsman, before obtaining a degree in Criminology.

Chuck eventually met and married Doreen Vance and they had two children together. However, after she cheated on him with one of his colleagues, they decided to separate from each other. ("Then I Really Got Scared"/"And Lots of Security...")

Bree's drive is blocked by another car so she takes illegal action to move it out of the way; she breaks into the car. The car owner, Chuck, comes around and jokingly tells her that he can get arrested. Frustrated, Bree complains that he was blocking her drive. He announces he is a police officer, scaring Bree, and he gives her his card, in case she sees Paul doing something suspicious. Later, a 911 call brings him to Bree's house. ("I'll Swallow Poison on Sunday")

Chuck and Bree arrange a date at a restaurant, but they both do background checks on each other. Bree reveals that she knows he is married, but Chuck explains that they're separated as his wife cheated on him. Chuck then tells Bree that he knows about all her past relationships that ended badly. After the date ended horribly, on the way home, Chuck picks up a prostitute and takes her to a shelter. Bree is touched by Chuck helping out Violet, so she decides to give him another chance. ("Then I Really Got Scared")

After a nice date with Bree, they both express their awkwardness of starting dating again. After talking to Lee, Bree begins to suspect that Chuck is gay. When Chuck takes Bree to meet his colleagues, this only strengthens her beliefs. To find out the truth, Bree takes Chuck to a gay bar that Lee has seen him at. However, Chuck explains that he's not gay and the only reason he's visited the bar is because he went undercover to investigate a drug stint. ("And Lots of Security...")

Chuck officially finalizes his divorce with his ex-wife, Doreen by allowing her to take whatever she wants. Bree and Chuck celebrate this by having they well waited first sexual encounter. They both attend Susan and Mike's progressive dinner and when they go to Bree's to prepare, they briefly see Alejandro. At the final part of the dinner, after Bree helped hide Alejandro's body, Chuck notices blood on the candlestick used to kill him, but Bree wipes it off, insisting it is strawberry sauce. ("Come on Over for Dinner")

A month after the death of Alejandro, Bree struggles to hide the secret from him, so she constantly distracts him with sex. After coming home from work, Chuck brags to Bree about solving a missing person case after he found the victims car. This makes Bree realize they never moved Alejandro's car, so she and Gaby go to find and dispose of it. Chuck finds them struggling to drive the car, so he offers to take it to "Shirley's" house. Chuck finds odd items around the car, so Bree and Gaby make "Shirley" out to be a butch lesbian. When Gaby throws up after chewing Tobacco, Chuck helps her out. The car is then stolen by a thief. While returning from a party, Chuck heads inside while Bree finds a blackmail note. ("Secrets That I Never Want to Know")

Chuck comes outside to see Bree looking very distressed at the letter she just received, but she assures him that she's shocked for receiving a letter from an old friend. After visiting Paul in prison, Bree finds out that Chuck knew about Mary Alice's note, so he could have blackmailed her. Scared, she tries to break up with him, but changes her mind. Chuck explains that he thought she was going to break up with him, and is pleased that she didn't. ("Making the Connection")

Bree finds a suitcase belonging to Chuck which contains a secret envelope with her name on it and a picture of Bree's hand. She becomes scared and she believes he is investigating her over the disappearance of Alejandro Perez. Chuck asks Bree to come to a restaurant with him, and when Bree sees that he is bringing the envelope with her name, she thinks he's going to arrest her. However, Bree discovers that he was going to propose. To stop Chuck from discovering the truth about her, Bree decides to break up with Chuck. He gets angry and assumes she was having an affair. He then leaves, telling Bree she just made a big mistake. ("Watch While I Revise the World") Later on, at his office, Chuck is given a missing person report for Alejandro as he mopes about Bree. ("School of Hard Knocks")

Chuck first visits Bree and he shows her a picture of Alejandro Perez, the missing person. He asks if she knows anything about his disappearance, as he remembers seeing the man the night of the dinner party. He then tells Bree he can tell when someone's lying because of micro-expressions. When he goes to touch her face, Bree yells at him to get off her and Ben suddenly defends her. Chuck is pushed away and told by Ben to stay away. ("Always in Control")

Chuck continues to harass Bree and he breaks into her house, but insist he came to investigate, to make her feel unsafe. Later, Chuck explains to Bree that he has been following her around town, and she hasn't even noticed. He then explains to Bree that the car that belonged to Alejandro Perez was the same car that he found Bree and Gaby driving. When he threatens to question Gaby, Bree tells him to leave her alone. Chuck then explains that even though he knows Bree didn't kill Alejandro, she knows who did. Later, Chuck follows Bree to Susan's art exhibition and he sees her "confession paintings" and this strengthens his suspicions. ("Suspicion Song")

Chuck decides to interview the other ladies, so he individually interrogates Susan, Lynette and Gabrielle. Each one of them reacts in a different way, but all deny having anything to do with Alejandro's disappearance. Later on, Chuck finds Renee and Ben, and he evilly tries to make Renee believe he's having an affair to get revenge on Ben. Chuck is later paid a visit by Bree and she offers to turn herself in to protect her friends, but he refuses as he wants her to suffer. Chuck then visits Gaby and he announces that he knows she was Alejandro's step-daughter, so tells her to come for a questioning tomorrow. That night, before making the investigation official with his new evidence, Chuck is run over and killed by Orson, who had been spying on him and Bree. ("Putting It Together")

At Chuck's funeral, many of his family, friends and work colleagues attend. Some of the guests include his Aunt Doris, Carlos Solis, Gabrielle Solis, Bree Hodge, Lynette Scavo, Tom Scavo, Susan Delfino and Renee Perry. ("What's to Discuss, Old Friend")

Chuck's death is brought up during Bree's trial. ("The People Will Hear")

When Susan Delfino decides to leave Wisteria Lane with her children, MJ Delfino and Julie Mayer, and granddaughter, Chuck's ghost appeared alongside Rex Van de Kamp, Beth Young and Lillian Simms, in front of 4354 Wisteria Lane, and they watched the family as they drove away from the lane and began their new lives together. ("Finishing the Hat")

Retrieved from "https://desperatehousewives.fandom.com/wiki/Chuck_Vance?oldid=89626"
Community content is available under CC-BY-SA unless otherwise noted.