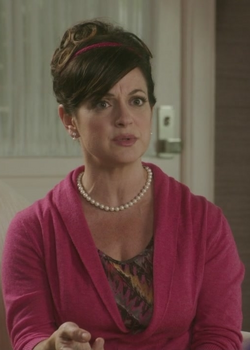 Cindy is a housewife and mother who is a member of Oakridge Elementary School 's PTA. She was close friends with Dana, the former PTA president.

Cindy makes her first appearance at a PTA meeting, wherein Susan Delfino tries to convince the parents to let her have her job back. Cindy, along with Dana and the others, are against the idea. ("Then I Really Got Scared")

Cindy is again seen at the drop-off with Dana, after Gabrielle Solis has her pass taken away. They force Gaby to park in the B Lot. Cindy is seen again at the PTA meeting. ("School of Hard Knocks")

Cindy is not impressed, as with the other PTA members, that Gaby is the new president, after Dana's back was broken by, well Gaby. She is even less impressed when Gabrielle shows up late for one of the meetings. Cindy, Rachel and Melissa then agree to torment her by letting her prepare for the parent-teacher appreciation night on her own, without their help. However, once Cindy discovers that Gabrielle is struggling with her husband Carlos' reliance on alcohol, she agrees to put an end to the group's game and to help Gaby prepare for event, further telling her to take care of her husband. ("The Art of Making Art")

Later, Cindy hires Lynette and Renee as interior designers to redecorate her home. When Lynette gets upset and begins to reminisce about her marriage, Cindy reveals that her and Franklin went through marital troubles 2 years ago, but they pulled through and she hopes Lynette and Tom will do the same. ("Suspicion Song")

Retrieved from "https://desperatehousewives.fandom.com/wiki/Cindy?oldid=72161"
Community content is available under CC-BY-SA unless otherwise noted.