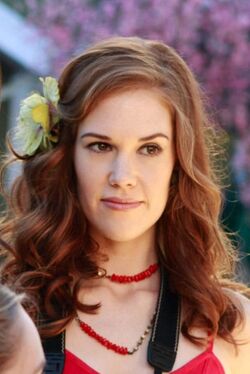 Cindy is Jane's photographer niece, whom she brought to Penny Scavo's birthday to take pictures of the event.

When Penny Scavo commemorates her 13th birthday with a grand party her mother set up for her, Tom, her father, decides to invite his new girlfriend Jane to join them for the festivity. Lynette is none too happy about this, but Jane attends anyway, and brings with her Cindy, her niece. Lynette says she didn't realize Jane was bringing a guest, and Jane explains that this is her gift for Penny (Lynette jokes: "A geisha?"), and Jane introduces the girl as her niece, who's a photographer. Cindy greets Lynette in a sing-song fashion. Jane explains that Cindy is gonna take some pictures of the party, and then she's gonna make a little memory book. Penny is excited, and Jane then pulls her closer so they can take the first pic. Lynette isn't happy. The two then put on funny faces and Cindy takes another pic, then exclaiming "Perfect." They laugh.

Later, during the party, everytime that Cindy tries to take a picture of Penny and Jane together, Lynette makes it her goal to photo-bomb the photograph, by always popping up in the background: when they're getting their nails done, when they're dancing, when they're jumping up and down on the trampoline, and when they're eating ice cream.

A while later, once Tom's come to the party with the cake and Lynette confronts him over having found out from Jane that the two of them are moving in together, Cindy shows up, asking if she can take a picture of 'mom and dad', but Lynette walks away, leaving her saddened husband behind and Cindy without a picture to take.

1 of 5
Add photo
Retrieved from "https://desperatehousewives.fandom.com/wiki/Cindy_(8.16)?oldid=77684"
Community content is available under CC-BY-SA unless otherwise noted.