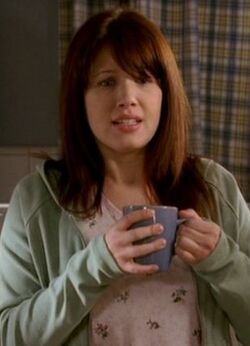 Claire was the Scavos' nanny, whom Lynette Scavo poached.

When Lynette begins to fall under the stress brought on by her four kids, she decides that a nanny is needed around the house. So she goes to a local park to go nanny poaching, and comes across Claire, who appears to be so attentive towards a boy and a girl she's caring for. Claire tells Lynette of the rude and demanding housewife she currently works for, named Alexis, who forces her to do all sorts of inappropriate things. It doesn't take long for Lynette to convince Claire to switch teams and move into the Scavo house. ("Suspicious Minds")

After a few days with Claire, the kids begin to grow very fond of her. Lynette notices this and becomes jealous and slightly concerned that maybe Claire isn't all that perfect, and, thanks to a suggestion by her good friend Bree, installs a nanny cam to find if Claire has any faults to her. Growing jealous of Claire's motherly affection for kids, and of how well they respond to it, she sets up a scheme to turn her kids on Claire. After doing so, she watches the tape and laughs at Claire's failed attempt to get the kids to eat vegetables. ("Come Back to Me")

Claire's days in the Scavo household are numbered, however, after an unfortunate incident resulting in Tom seeing her naked and, in result, making him frisky towards his wife. Claire tells Lynette of the incident the following morning, and she confronts Tom about it while they are at the local mall. Later, as Claire wipes down the table, Lynette catches Tom staring at the unsuspecting nanny's cleavage, while she and her discuss Parker's apparent sniffles. This prompts Tom to announce to Claire that they need to make some changes, and that's the last we see of her. ("Move On")

Retrieved from "https://desperatehousewives.fandom.com/wiki/Claire?oldid=87691"
Community content is available under CC-BY-SA unless otherwise noted.