Start a Wiki
watch 01:22
The Loop (TV)
Do you like this video?
Color and Light 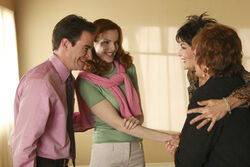 "Color and Light" is the 30th episode of Desperate Housewives.

Lynette Scavo has always known that her children were different from the other neighborhood boys since Porter, Parker and Preston like to play different games. When several of the mothers refused to make play dates with Lynette anymore, she discovers that if the boys' play dates disappear that her free time from work will also. Lynette then finds her children playing with a new group of friends who have just moved on the block. When Norma, the boys' mother asks Lynette if the boys are alright, Lynette decides that they are fine and that they are only playing. The two decide that they should arrange another playdate. Lynette enjoys her freedom but when it comes their turn to host the boys, the Harper boys bring along with them a video. When Porter and Preston leave the room, Lynette wonders if they are becoming bored with the other boys. Lynette enters the twins' bedroom where she finds Parker and the other boys watching their parents' homemade sex video. Immediately Lynette blocks the television before Norma's breast is exposed and ejects the tape and keeps it in her possession for the time being. When Lynette and Tom approach Norma and Leonard about their tape, Norma panics feeling outed and ashamed. Leonard has the opposite effect and decides to show Lynette and Tom their private film studio where they shoot and produce all of their videos. Lynette and Tom look on in horror and decide to keep the play dates to a bare minimum.

Bree is surprised by George when he tells her that he has purchased a house in the neighborhood. Bree feels happy for George but when she discovers his mother and a realtor are hiding in the other room, Bree discovers that she might be in the house for a reason. At that moment, George gets on one knee and proposes. Bree freezes up but seeing that he is in the presence of George's mom, she says "ok" causing a celebration for the two. Bree then has second thoughts when she talks it over with her therapist, Dr. Goldfine. Dr. Goldfine asks if this is what she really wants after her previous marriage was taken away from her so suddenly. Bree knows in her heart that she loves George as a friend, but not as a spouse and would love to do things with him even if that means getting married against her will. When she arrives at her "engagement party", George tells all of his friends how his luck changed when Bree walked into the pharmacy and asked her out. He also talks of the possibility of children. At the exact moment, Bree barks at George's suggestion when even he knows that she has had her hands full with her own children. Bree eventually walks out with George quickly following behind her. Bree tells George that she cannot marry him and when he asks why she tells him that she had talked it over with her therapist. Bree drives away as George gives a cold look and walks back into the party. The following day, George follows Dr. Goldfine jogging and when Goldfine least expects it, George comes from behind and throws him off of the bridge he had been jogging on.

Gabrielle is beginning to show signs of her pregnancy which she is not liking since her weight is going up and she is expecting old friends from her modeling days to arrive. Gabrielle tries her best to cover up her pregnancy so that the women won't tease her for beginning the journey to becoming yet another bored, fat housewife - which Gabrielle vowed she'd never become. Gabrielle does on a 48-hour crash diet, but still is unable to fit into the gorgeous gown. With help from Bree, she manages to get into the dress and Bree gives her the advice that parenthood is a cherished gift and that some things are hard to cover up. Gabrielle smiles and continues to prepare for the arrival of her friends. When they arrive, they automatically see that Gabrielle is pregnant and instead of making fun of her, they congratulate her. Gabrielle feels proud of her former friends' acceptance but finally understands that her true friends are the ones that do not judge.

Susan gets the last of her things from Mike's house and the two part ways. Susan then witnesses her ex-husband Karl breaking up with Edie. The following evening, Karl visits Susan who is alone and the two begin to drink a bottle of wine. Karl tells Susan that the reason that he and Edie broke up was because he kept an old picture of Susan underneath her mattress. Edie saw this as a sign of Karl's recurring love for Susan even though they are divorced. The following morning, Julie arrives home to find her two parents in bed after a night of unexpected romance between the two. Julie looks in disgust and quickly leaves. Later, Susan tells Karl that their fling the night prior was a one-night stand since she is clearly not ready and unwilling to get back together with him. Karl feels differently but after giving serious consideration gets back together with Edie. Edie then unexpectedly thanks Susan for whatever she did to reunite the two. Susan feels as if she made a difference but still feels lonely because of her judgment.

Betty and Matthew discover that Caleb has escaped shortly after their confrontation. Caleb's disappearance leads them to snooping around the neighborhood for any traces of Caleb. Matthew searches the street but is soon drawn to Danielle Van De Kamp when he searches Bree's backyard. He lies and tells her that he is there to ask her out. Danielle surprisingly says "yes" and Matthew leaves the yard happy. That night however, after Gabrielle finished entertaining her guests she goes upstairs to find a box of ice cream half eaten causing her to think she has an intruder in her house. Gabrielle soon comes eye to eye with Caleb and quickly runs away before he does anything dangerous. Her escape comes with a price though when she trips and falls down the stairs. Gabrielle lands on the floor helpless and witnesses Caleb quickly leaving the house. Bree arrives back at Gabrielle with her sewing kit but immediately calls an ambulance when she finds Gabrielle on the floor. Gabrielle is escorted into the ambulance van as she clutches her baby's sonogram picture.

Retrieved from "https://desperatehousewives.fandom.com/wiki/Color_and_Light?oldid=89117"
Community content is available under CC-BY-SA unless otherwise noted.