Start a Wiki
watch 01:22
The Loop (TV)
Do you like this video?
Coming Home 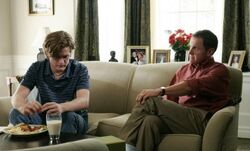 "Coming Home" is the 33rd episode of Desperate Housewives.

After searching for his father in Utah for a few weeks, Zach Young finally returns home to find his father anxiously awaiting his return home. After becoming re-settled with domestic life, Zach asks his father if what Felicia had said about his birth mother was indeed true. Paul nods and tells him that they were just trying to give him a better life. Zach then asks if he knows who his real father is. Paul tells him that he does not know who he is. However his actual biological father lives a few doorsteps away. Days later, Paul knocks on Mike's door to tell him that Zach is home and to leave them alone. Mike tells him that he has no intention of staying quiet and that if he sees a "For Sale" sign or anything suspcious he will phone the police. Paul gives him the warning and walks away.

Bree arrives at George's home to learn from the police that George has committed suicide in a hotel room shortly after his home invasion. Bree looks surprised at the police officer's news but becomes even more amazed when the police ask her if several garments of underwear belong to her. At that exact moment, the police take a manniquin out of George's study that has a likeness to that of Bree. When Bree asks if that is supposed to be her, the detective tells her that according to his belongings, George was quite eccentric and perverse. Detective Barton then advises her to tell her family and friends the truth of her relationship with George before a leak is released to the press. She proceeds to tell Susan, Gabrielle and Lynette who feel bad for Bree since George was poisoning Rex. Andrew then returns home from deprogramming camp in a jeep. Bree then tells him what happened with George and that his father was murdered in order for George to marry Bree. Andrew is very upset at this revelation and promises to have his revenge on Bree. He then (against Bree's will) decides to invite a friend over, Justin to spend the night. As the two play video games, Andrew, tries to get Justin to have sex with him. But Justin says to wait a little while, and that he'll make it worth Andrew's while. Andrew then tells Justin that he wished his mom would walk in on them, as part of how he plans to bring Bree down. The following morning, Bree tells Andrew about how George really died and Andrew plots to use it against her in the future as part of his plan for revenge.

Gabrielle finds out that Carlos is planning to go on a mission to Africa to help out the poor and sick. Gabrielle at first believes it is a plan that Sister Mary had created but when she learns that Sister Mary Bernard will not be able to go due to a lack of funds, she agrees to put up the $8000 so that Carlos can stay home. Sister Mary asks Carlos to come anyway since she will need a "male companion". Gabrielle scoffs at this and forgets to tell a nurse about Carlos' allergies to eggs during his vaccinations. Carlos has an allergic reaction to the Yellow fever vaccine and is forced to stay in bed, thus missing the missionary trip. As Gabrielle holds Carlos in bed, he complains about how hot the village is and moans the name "Sister Mary".

Susan tries to build her relationship with her father Addison by showing him a brief history of her life from age 1. Addison bores easily over the pictures which include a Halloween where she was dressed as a chicken or when she had to go to the Father-Daughter dance with her mother's hairdresser. Addison tells Susan he has to leave and asks if they are done. Susan feels rushed and asks where he is going. Addison proceeds to take the "hobo picture" and runs off. Susan does not receive a phone call from Addison until he is arrested for having sex with a prostitute who was actually an undercover cop. Susan tells Addison how ashamed she is and goes to pay his bail money. After dropping him off, Addison's wife, Carol sees them together and writes down Susan's license plate. The following morning, Susan goes out to get her newspaper and finds "WHORE" written in dark red lettering on her garage door. Susan then calls Addison who comes over and tells her that it was definitely the work of Carol. Susan then runs into Carol at the grocery store and tries to explain her situation but Carol does not want to hear it and starts to throw groceries at her. Only when Susan says that Addison is her father she stops and becomes saddened over the fact that Addison has been unfaithful since the beginning. Susan comforts Carol who leaves and tells her that Addison isn't as good as he seems. The next day, Susan paints over her garage door as Addison drops by. He tells her that he would not mind seeing her again since she has been so good to him and that he was being rude. Susan agrees and invites him to call whenever he is in the mood.

Lynette tries to create a company day care center when she spends yet another night without seeing her kids. Ed agrees and Lynette tells him that they need at least 16 children to seek approval. Lynette has 15 so far but needs one more child to make the day care official. Ed then tells her that his daughter Mindy could come but that they would have to ask his wife, Fran if that would be alright. When Lynette meets with Fran, she tells her straight the criteria of the day care and that Mindy would not be required to stay the entire day. Fran tells Lynette that she objects since she "loves spending time with Mindy". Ed goes to desperate measures to see that they receive the quota. The following morning, Ed brings Mindy to work without Fran's consent which leads Fran to show up and ask what is going on. As the two quarrel, Lynette takes Mindy into her office and locks the door behind her. Ed tells Lynette that what she did was a good plan. Lynette then tells Ed that what he did was considered stupid. Lynette advises them that they need better ways of communication in order to get what they want. Fran admits that she does get tired now and then and that maybe day care is not such a bad idea. Lynette agrees and recommends that the two talk about the situation in the lobby over coffee. The next week, day care is in session and Lynette is happy to see baby Penny during her break.

Betty Applewhite finds out from Edie that Gabrielle's intruder is remaining quiet and that his identity is unknown. The police are currently keeping Caleb in a mental hospital until he starts talking. Betty and Matthew decide to bring Caleb home by planning a secret escape. As Betty plays piano for the other patients, Matthew creeps behind and pulls Caleb out from the room. Little do they know that another person is looking for Caleb (who is disguised as a hospital employee) and follows Caleb and Matthew out.

Retrieved from "https://desperatehousewives.fandom.com/wiki/Coming_Home?oldid=89120"
Community content is available under CC-BY-SA unless otherwise noted.