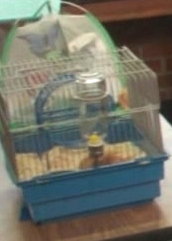 Cupcake was a class hamster at Oakridge Elementary School, who perished in the 8th season premiere.

In the 8th season premiere, Susan Delfino, then working as a substitute teacher at Cupcake's school, is shaken by the recent manslaughter of Alejandro Perez, her best friend's malevolent stepfather, whose death she helped cover up. Because of this, Cupcake's sudden death triggers a surprisingly bad reaction in Susan.


Juanita Solis calls Susan and announces that Cupcake is not moving. Susan tells her she's probably sleeping, but Juanita reveals that she poked her with the pencil a couple of times, and adds that "She's D-E-A-Dead." The kids are surprised by this and get up from their desks, as Susan tries to maintain order by telling them that she knows what to do. However, she quickly turns to Mrs. Henderson, her co-worker, and asks "Oh, my God, what do I do?". Mrs. Henderson tells her there's a little spot in the garden where they bury the class pets. The word "bury" strikes a spark with Susan. Her colleague suggests that she has a little funeral and say a few words, but advises her not to mention God, because Amanda's parents are atheist lawyers and major douches. She then leaves the classroom, and Susan looks very preoccupied.


Later, the kids, including Juanita, are all gathered around a small garden plot in the schoolground. Susan is kneeled by the plot, frozen, holding a small trowel. Juanita says "I don't know if you've ever buried anything before, but you have to dig a hole." Susan hesitantly says "Right. Of course. I knew that." She then proceeds to dig said hole in the plot, telling the kids "It's funny the way life turns out sometimes, isn't it? I mean, I wasn't even supposed to be here today. Once again in the wrong place at the wrong time." Juanita looks confused. Susan fights to hold back the tears as she says "Now I have to carry this around with me for the rest of my life." Juanita tells her not to be sad, because Cupcake was kind of a bad hamster: she had three babies and ate them. Susan turns to her and says "But does that mean she deserved to die? We don't get to make that call, Juanita. We're not God!". She then turns to a little girl, teary-eyed and angered, and says "That's right, Amanda, I said it." Amanda and Juanita exchange a confused look. Susan picks up the dead hamster, drops it into the hole and starts crying yet again, saying "Oh, what have I done?". Juanita tells her it's not her fault, and Susan responds by saying "I know it's not my fault, but try telling that to Cupcake's family when they show up looking for her.". Susan then quickly covers up the hole with the trowel. She then gets up and says "There. We're done. Now let's all slap on a happy face and pretend like it's never happened." She walks away, and the kids are still unclear on what just happened.

Retrieved from "https://desperatehousewives.fandom.com/wiki/Cupcake?oldid=86087"
Community content is available under CC-BY-SA unless otherwise noted.