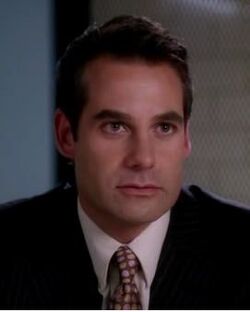 David Bradley is a sleazy, womanizing lawyer whom Gabrielle Solis hired to help get a conjugal visit with her husband and to help get him out of jail.

Gabrielle meets with David in his office and tells him she wants help getting conjugal visits with her husband who's in jail. He tries to talk her out of staying married to Carlos, because he is an apparent brute and he knows from experience women don't stay married to such men for long. However, she is very demanding and stubborn, and David finds it quite arousing, and comes on to her. Gabrielle turns him off by announcing that she's pregnant. ("My Heart Belongs to Daddy")

After David makes such conjugal visits happen, Gaby wants him to meet with Carlos, but the later finds David way too attractive, and worries about his relationship with his wife, so he tells them he wants another lawyer to represent him in court. David meets with Gabrielle at her house, and she tells him he should convince Carlos he's not interested in her. David then meets with Carlos and Gaby yet again, and tells him he wants to hook up with her. Gaby thinks he's joking, but Carlos is interested in hearing what he has to say. David says his wife is very attractive and after Carlos fires him he will take her to his ski challet and they will engaged in several winter activities and eventually will wind up having sex in front of the fireplace. However, this should only happen in case Carlos fires him, because if he doesn't, Gabrielle will be off limits. He could get disbarred for sleeping with a client's wife, and no woman is worth that, not even Gaby. David leaves to let Carlos think about it, and Gaby tells him David is clearly insane. Carlos, thinking she might want to have sex with the attorney, tells her he's his attorney, much to Gabrielle's displeasure. ("They Asked Me Why I Believe in You")

The time for Carlos' trial comes, and David notices that Gabrielle is sharply dressed, although he had advised her to dress like a suffering mother-to-be. He rushes her to go home and change, but is followed around by a man named Louis who used to stalk a cashier until David got her a restraining order that said he should stay away from her. Louis pulls out a gun and aims it at David, who pushes Gabrielle to safety. Louis misses every single shot and then throws his gun at David, who grabs it and taunts him. A police officer shows up, and when David puts his gun in the air and says everything is okay, the officer shoots him in the shoulder. David is hospitalized afterwards, and forced to wear a sling. Gaby pays him a visit, and is the first person to do so. She cuts his meal for him and serves it to him. Due to this, David realizes he's developing feelings for Gaby, and when he finally shows up in court to defend Carlos, he can't do it, and leaves. Outside, he tells Gabrielle he can't get her husband out of jail because he loves her and they belong together. Later, Gaby calls David to her house, and greets him with a sexy lingerie. He realizes where that is going, and Gaby tells him she won't leave Carlos, because she's a Catholic and she'd feel guilty. However, she will have an affair with David. First, he says he wants all or nothing, and Gaby says if so it'll be nothing, so he agrees to the affair. This leads her to dismiss him, saying Carlos would never have agreed to an affair with her because he really loves her, whereas David only feels lust. She tells him he better come up with a case to save Carlos or else she'll sue him for sexual harassment. ("I Wish I Could Forget You")

Retrieved from "https://desperatehousewives.fandom.com/wiki/David_Bradley?oldid=84980"
Community content is available under CC-BY-SA unless otherwise noted.