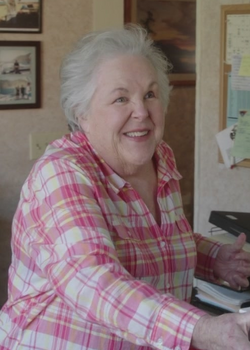 Debi Brown is a hotel receptionist who worked at the last resting place of Alejandro Perez.

Detectives Murphy and Heredia are seen at a local resting place, chatting with the receptionist, Debi Brown. Murphy is telling her details of the man whom they're investigating, Ramon Sanchez, who must've stayed there about six months earlier. Mrs. Brown tells them information regarding the man could possibly be found in her 'treasure chest' - where she keeps items left behind by the clients. Apparently, her husband calls it 'hoarding', but she likes to think of it as simply collecting. The detectives engage in a pleasant chuckle, and Heredia thinks they're wasting their time, after the woman's gone. Murphy tells them that if the judge needs more connection between Mr. Sanchez and Bree, he'll find it. Debi shows up with a box, cheery, telling them she found it: "Room 208. Ramon Sanchez.", she says. Debi hands them the box and leaves again. ("With So Little to Be Sure Of")

Retrieved from "https://desperatehousewives.fandom.com/wiki/Debi_Brown?oldid=74149"
Community content is available under CC-BY-SA unless otherwise noted.