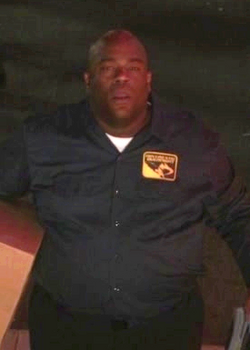 On the night of Halloween, at Lynette’s house, Penny is outside her mother’s bedroom with her cat make-up on. She knocks on the door and asks for the costume, but Lynette says she’s putting on the finishing touches. She then goes to the phone and says a tracking number to the person on the other line, worried because she hasn't received the costume she ordered yet. With that, the delivery man pulls up outside her house. She opens her window and loudly whispers to the man, telling him to throw the box to her... two stories high. The man reluctantly throws it, and Lynette catches it perfectly. She then quickly takes the costume out of the box, throws the box out the window, and then Penny enters to see Lynette holding the costume. Lynette says it’s finished and gives the costume to her without even looking at it, so Penny thanks and hugs her before going to get ready. The delivery man then yells to the window that he needs a signature, so Lynette closes the window to avoid Penny from hearing him. ("Witch's Lament")

Retrieved from "https://desperatehousewives.fandom.com/wiki/Delivery_Man_(8.06)?oldid=77271"
Community content is available under CC-BY-SA unless otherwise noted.