Start a Wiki
watch 01:22
The Loop (TV)
Do you like this video?
Desperate Housewives: The Complete Third Season - The Dirty Laundry Edition 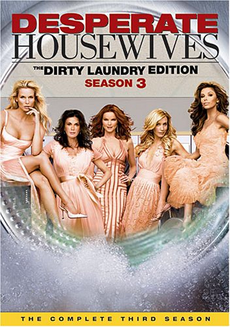 The women of Wisteria Lane are back, and it’s time to air some dirty laundry. In the Emmy Award®-winning show’s sensational third season, the gossip is juicier, the secrets are more scandalous and the revenge is even sweeter. "Desperate Housewives is back," raves The New York Daily News. Experience all 23 tantalizing episodes of Season Three, and get the dish on Susan’s new love, Bree’s unsettling marriage to Orson (Kyle MacLachlan) and a dangerous new presence living down the lane. Everything will come out in the wash in this spectacular six-disc set. Bubbling over with exclusive bonus features, including a behind-the-scenes look at the season finale and even more secrets straight from the show, this is the sudsiest season yet.

Retrieved from "https://desperatehousewives.fandom.com/wiki/Desperate_Housewives:_The_Complete_Third_Season?oldid=89022"
Community content is available under CC-BY-SA unless otherwise noted.