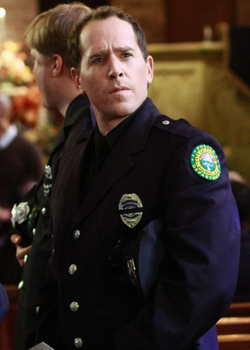 The Detective shown in the episode "What's to Discuss, Old Friend?" is a uniformed police detective who recognized Carlos Solis at the funeral held for Detective Chuck Vance.

Shortly after the hit-and-run death of Detective Chuck Vance, a Fairview police detective, a funeral service was held at a local church in his honor. The attendees included Carlos Solis and his wife, Gabrielle, who were involved in a recent murder cover-up that was being investigated by Vance. Carlos felt guilty as he attended the funeral for the man who had pursued him and his wife. Carlos quietly asks her what they are doing there, as there are cops everywhere. He says he is taking a huge risk by being there, and Gaby tells him he's paying his respects, which is what innocent people do. In front of them, a uniformed detective is staring at them. Carlos asks her why that cop is staring at him, since he's "so innocent", and Gaby tells him to stop acting so guilty. The detective comes up to them, having recognized Carlos, and asks if he remembers him.

Carlos meekly says "No", and the detective answers that he is not surprised, considering that Carlos was pretty wasted when he came into the station the other night. Carlos is confused, and so is his wife, who asks him if he went to the police station, and the detective confirms this, stating Carlos wanted to make a confession. "Something about beating somebody with a candle stick?"; this shocks Carlos and Gaby, who are thrown off, and they try to stall as they came up with something to tell the detective. Gaby, smiling, tells her husband he shouldn't have said that, and then turns to the detective, still with her fake smile, and asks what else he said. The cop says that that's when the news came in about Detective Vance, and all hell broke loose. "By the time things settled, he was gone. So, who's this person he assaulted?", he asks Carlos, who is unclear on what to say, and Gaby steps in and tells the detective Carlos assaulted her. The detective is shocked, and Gaby tells him she's a bit of a handful. The detective turns to Carlos for confirmation that he hit his wife with a candlestick, and Gaby says he hit her back. "In his deffense, I'd just popped him with a baseball bat", she adds. The detective is concerned and confused, and all Carlos can do is put on a nervous smile. He then asks Gaby if she wants to file charges... and then asks the same to Carlos. Gaby says they're good. "This thing we got isn't pretty, but it works." They then walk past the very confused detective. ("What's to Discuss, Old Friend?")

Retrieved from "https://desperatehousewives.fandom.com/wiki/Detective_(8.10)?oldid=74640"
Community content is available under CC-BY-SA unless otherwise noted.