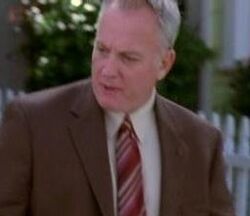 Detective Copeland is the detective who was put in charge of the case of Martha Huber's disappearance and, eventually, the case of her murder.

Detective Copeland is introduced at a neighborhood meeting held in Martha Huber's front yard and hosted by him and Martha's closest friend, Edie Britt. Several fliers were handed out to the neighbors, as the detective explained that a rescue mission would be held later on. When Martha's cadaver is finally found, Detective Copeland warns her sister, Felicia Tilman, in person. They discuss the details in her sister's house, which was then being occupied by her. He asks her for any information she can provide that could prove to be valuable to the solution of the murder mystery, and Felicia reveals that Martha kept several journals, so she promises to try and find them and hand them over to the police. In his last appearance, Copeland interviews Susan Mayer about her then-boyfriend, Mike Delfino, who was the primary suspect in Huber's murder case because of her blood-stained jewelry having been found in his garage by Preston and Porter Scavo. Susan sticks by Mike, but Copeland shows her something very upsetting: his prison records. Mike is an ex-con, who did time for manslaughter. Susan is broken down by this, and when Copeland leaves the interviewing room, he asks his partner, Detective Sullivan, if he thinks Susan's covering for her boyfriend. Sullivan smirks and tells him she's just a "sucker".

In the first season finale, Susan talks to Mike over the phone, telling him they should get Martha Huber's journal, which was handed to Mike by her sister Felicia, to the police, as it contains evidence that Martha was blackmailing Mary Alice. Mike tells her he'll schedule a meeting with Detective Copeland to take care of that. But he's lying.

Retrieved from "https://desperatehousewives.fandom.com/wiki/Detective_Copeland?oldid=67922"
Community content is available under CC-BY-SA unless otherwise noted.