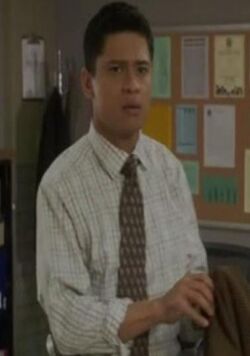 Detective Gillette is a local detective working for the Fairview Police Department.

Following the discovery by Wisteria Lane resident Bree Van de Kamp that her ex-husband Orson Hodge was responsible for the blackmail perpretated to her, after the cover-up of the murder of Alejandro Perez, Orson mails an envelope containing information blaming Bree for the crime to Fairview's police department, and the envelope makes its way to Detective Gillette's secretary.

A while later, Detective Gillette finally opens the envelope. He skims the contents, and calls his co-worker, Detective Murphy, telling him he should take a look at it.
Shortly afterwards, Murphy is reading the pages, and Gillette comments on the 'crazy stuff' in there. He asks if there is any chance it could be on the level. Murphy reads aloud the name 'Bree Van de Kamp', and tells his partner that he knows her - she's the one who ripped Chuck's heart out. Murphy tells him he has a feeling about this. Gillette asks if he has enough of a feeling to go dig up a construction site, and Murphy confirms this. They get a move on.

Retrieved from "https://desperatehousewives.fandom.com/wiki/Detective_Gillette?oldid=84322"
Community content is available under CC-BY-SA unless otherwise noted.