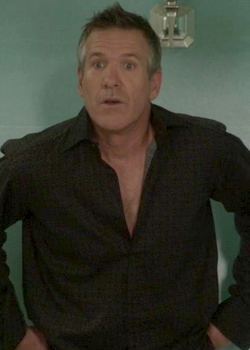 Don was one of Bree's sexual conquests whom she picked at a bar. He was found leaving Bree's house by Karen McCluskey.

Bree is in bed when she’s woken up by someone knocking on her door. She checks the time and realizes there is still one of the men in her bed, horrifying her. She gets out of bed and asks the man, Don, why he’s still here and if the alarm went off. He explains it did, but he turned it off because it was too early. As she gets dressed, Bree bluntly tells him that he should’ve left at that time, because that’s when “all the mean leave”. The door knocks again, so Bree tells Don she’ll get rid of them so he can sneak out. As she runs downstairs, she tells Don to stay where he is, confusing him.

Moments later, Bree answers the door to find Karen. Karen enters the house as she tells Bree that she’s angry. She then tells Bree that she needs help. Bree impatiently asks what with, so Karen explains that Helen Simpson decided to make the lemon bars for this year’s Church Bake Sale. She then tells Bree that she can’t compete with Helen because Helen uses real lemons. Bree asks what Karen uses, but all she says is that she’s on a fixed income. With that, Bree notices Don sneaking downstairs, behind Karen, naked, and she panics for a moment. Bree then tries to distract Karen, so she comfortingly says it must be hard having a fixed income. Karen asks what to do, so Bree asks if she’s considered “covering her lemons” (which was really directed to the naked Don). Don quietly grabs his underwear, and Karen becomes confused. Bree corrects herself and says Karen has the lemon bars covered and she assures Karen she’ll ask Helen to make something else. Bree then asks Karen to leave, but she reveals that she’s waiting for the naked man behind her to finish getting dressed (revealing she’d seen his reflection). Don suddenly apologizes to Bree, stating he had a meeting. As Don goes to get his trousers, Karen gives Bree a judgmental look. Bree tells her not to and explains that Don is a close friend. As Don returns, Bree says “see you later, Dan” as he exits to house, but he tells her his name is Don, making Bree hurry him out. ("What's the Good of Being Good?")

Retrieved from "https://desperatehousewives.fandom.com/wiki/Don?oldid=77311"
Community content is available under CC-BY-SA unless otherwise noted.