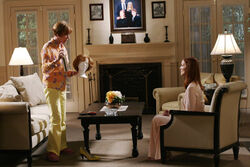 "Don't Look at Me" is the 42nd episode of Desperate Housewives.

The drama between Susan, Karl and Mike continues. Karl is consistently showing affection towards Susan. Angry at this, Julie refuses to go to the movies with her. Just as Susan has taken her seat, she spots Mike come in with a date. She then rushes to sit next to the closest stranger and tells him to act like he knows her. The stranger immediately introduces himself as Dr. Orson to Mike, but it turns out Dr. Orson is there with his girlfriend too. Then later, he drops by Susan's house to return her purse that she left behind, and Susan ends up discussing her complicated love life with him. Dr. Orson tells Susan to quit having any feelings for Karl, he just isn't a good guy.

After a few more incidents where Karl tells Susan he still has feelings for her and would do anything if she told him to, Susan tells him off and returns home. Later, Karl visits Susan and tells her that he and Edie have broken up and the wedding's off. Feeling sympathetic in spite of herself, Susan invites Karl in for a bottle of wine. The two ultimately end up in bed. Susan tells Karl that she feels good about this too and she's not having any second thoughts. Just then, the phone rings. It's Edie. Edie wants Karl to get some juice. Suspicious, Susan immediately asks him why is she asking for juice from him when they've broken up. Karl tells Susan that the break-up is still a work in progress. Furious that he cheated on Edie with her, Susan throws out Karl for good.

Also, Paul Young's troubles with Felicia Tilman continue. Leaving his house to go to a drug store, Paul trips badly on his front steps. It turns out his front steps have been greased with shortening. A cheerful Tilman, who's baking cookies, pops out to check on him. Next, Paul and Zach are having a cookout when Paul lights the grill to find the lighter fluid has been replaced with gasoline, resulting in a fire that shoots up in Paul's face. Later, Paul wakes up to find his house has been covered in an exterminator's tent. Angrily, he goes out, only to find Felicia Tilman merrily apologizing for giving the wrong address to the exterminator. Then she asks Paul if he was going to shoot himself like Mary Alice did. Paul grabs her by the throat, but Felicia tells everyone to look at how unstable Paul Young happens to be.

Lynette is called to Parker's school, and she's horrified to learn the reason. According to his teacher, Parker offered a girl a cookie if she'd let him see underneath her dress. Lynette then tries to explain the concept of "the birds and the bees" to Parker, complete with a "seed".

After a day of babysitting Lynette's kids, Mrs. McCluskey tells Lynette that Parker asked her to show him her vagina, so that he could put a sunflower seed in there and see if a baby would grow. McCluskey advises Lynette to tell him that sex is dirty and shame him. Lynette refuses to do it initially. But then, when Lynette involuntarily shames him, she instantly finds a new obsession for Parker to fret over: a puppy.

Bree's parents, Henry and Eleanor Mason, also show up as a result of Danielle's phone call. Henry convinces the judge to postpone the hearing and then insists to Karl that they can solve this problem "in house". After a failed attempt or two at reconciliation between mother and son, Eleanor tells Bree that acting on Andrew's suggestion, she and Henry are taking Andrew with them to Rhode Island, because if he stays with Bree they'd just keep on fighting. The next day, Bree watches as Andrew breaks the news to Justin and drives off. Justin is saddened to learn that Andrew is moving without telling him. So Bree talks to him and the two agree to devise a plan for making Andrew stay.

When his grandparents are loading up Andrew's belongings, Bree deliberately brings an open box in the end and puts it in Henry's view. Henry and Eleanor then go through the contents of the box and are shocked to find gay pornography. Changing their minds, they decide to leave Andrew with Bree, but they revoke his trust fund nonetheless. Andrew is angry when he learns this, but Bree softens the blow by telling him she's invited Justin over for dinner.

Also, a judge grants temporary custody of Baby Lily to Gabrielle and Carlos, since the baby's birth father is currently on spring break and could not attend the court proceedings. Having to wake up night after night to tend to Lily, Gabrielle pleads with Xiao-Mei to take care of Lily, while she sleeps herself. Then she gives Xiao-Mei a gift certificate to her spa so that she can relax. One day, while Gabrielle is getting late for lunch with Bree, she hurries out and tells Xiao-Mei to watch over Lily. At the restaurant, Bree tells Gabrielle that she was at the spa and she saw Xiao-Mei there. Apparently, she was using the gift certificate that Gaby had given her. Terrified, Gabrielle speeds back home and vows never to leave Lily alone again.

Retrieved from "https://desperatehousewives.fandom.com/wiki/Don%27t_Look_at_Me?oldid=89127"
Community content is available under CC-BY-SA unless otherwise noted.